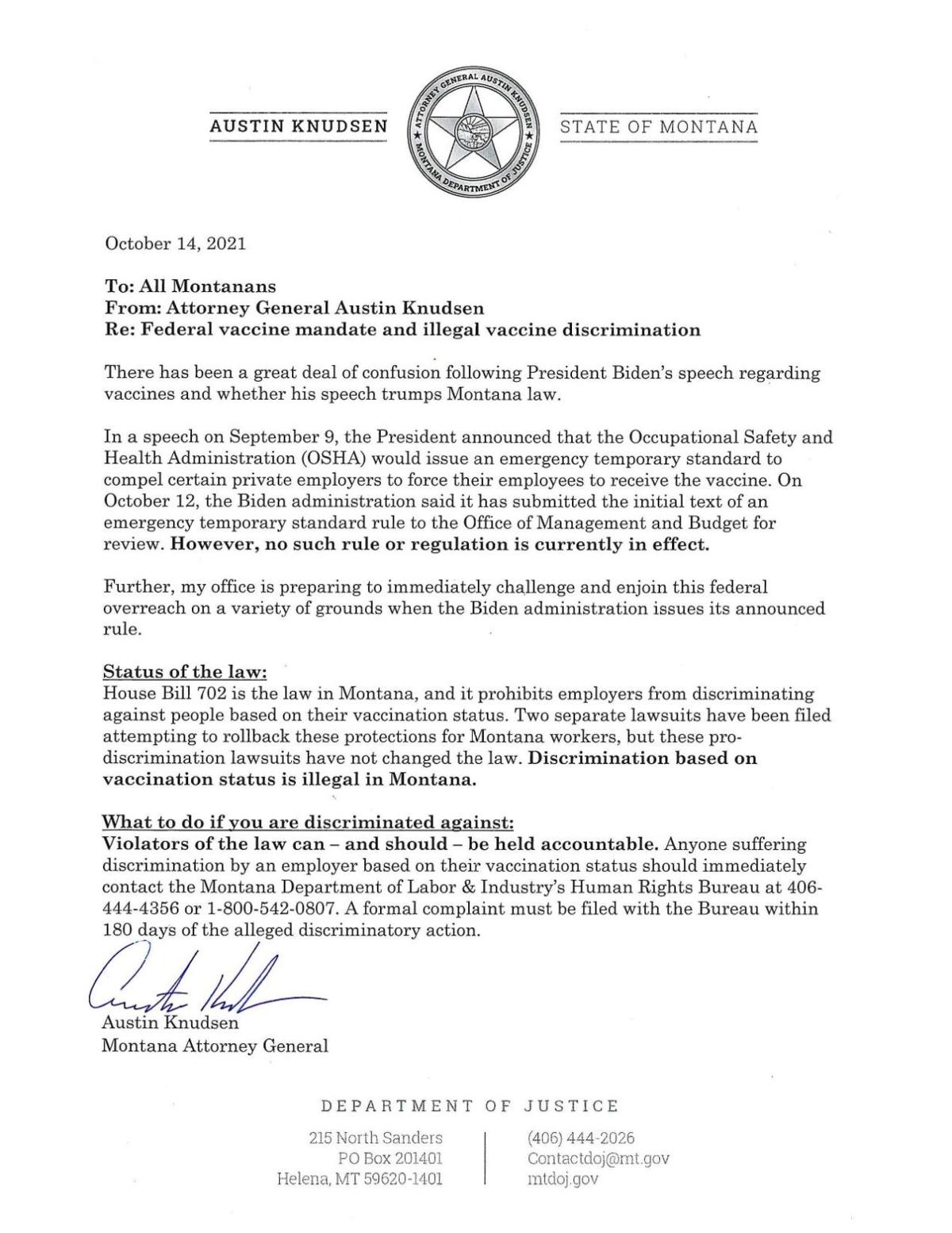 HELENA, Mont. - On Thursday, Montana Attorney General Austin Knudsen issued legal guidance on the status of the Biden administration’s proposed federal vaccine mandate and discrimination based on vaccine status, which is illegal in our state.

As stated in a release, the guidance is intended to help clear confusion after the president’s Sept. 9 speech discussing his plans to compel private employers to require COVID-19 vaccines for their employees.

According to a U.S. Department of Labor spokesperson, the agency submitted the initial text of the emergency temporary standard to the Office of Management and Budget as part of the regulatory review process.

“On October 12, the Biden administration said it has submitted the initial text of an emergency temporary standard rule to the Office of Management and Budget for review. However, no such rule or regulation is currently in effect,” Knudsen’s guidance reads. “Further, my office is preparing to immediately challenge and enjoin this federal overreach on a variety of grounds when the Biden administration issues its announced rule.”

Two lawsuits have been filed challenging the new state law established by House Bill 702 that protects Montana workers from discrimination based on their vaccine status.

“House Bill 702 is the law in Montana, and it prohibits employers from discriminating against people based on their vaccination status. Two separate lawsuits have been filed attempting to rollback these protections for Montana workers, but these pro-discrimination lawsuits have not changed the law,” Knudsen wrote in the memo. “Discrimination based on vaccination status is illegal in Montana. Violators of the law can – and should – be held accountable.”

Anyone suffering discrimination by an employer based on their vaccination status should contact the Montana Human Rights Bureau at 406-444-2884. A formal complaint must be filed with the Bureau within 180 days of the alleged discriminatory action.

Immediately following Biden’s Sept. 9 speech, Knudsen announced he would file a lawsuit when the federal rule was issued. He and 23 other state attorneys general also wrote a letter telling Biden that this “disastrous and counterproductive” mandate would only drive more Americans from the job market, further burdening the health care system and the economy.