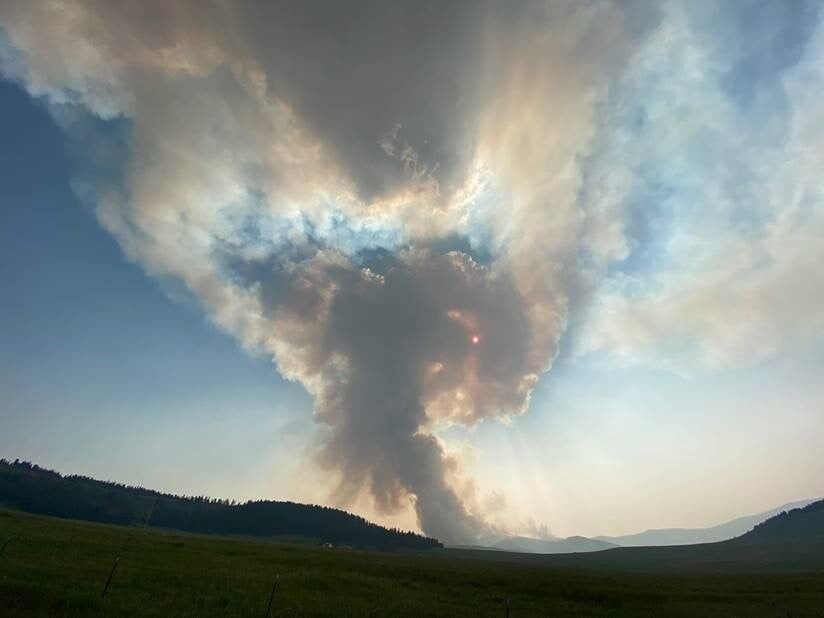 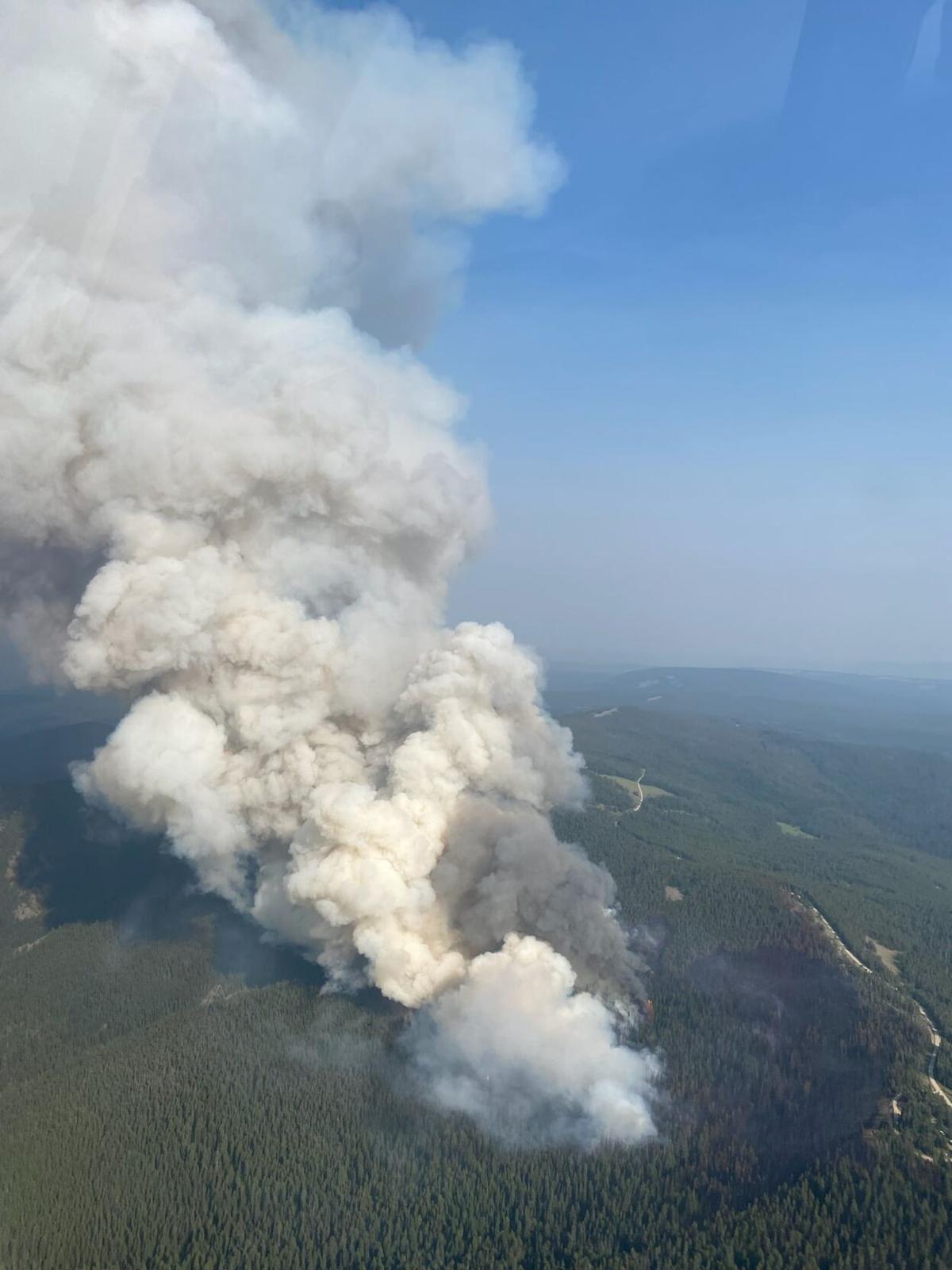 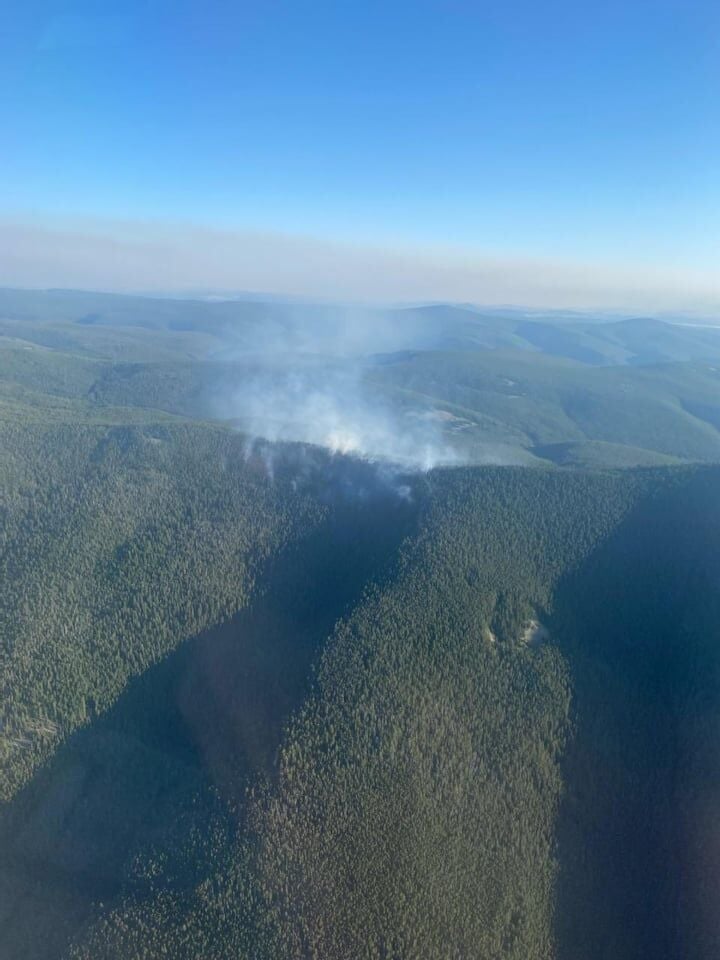 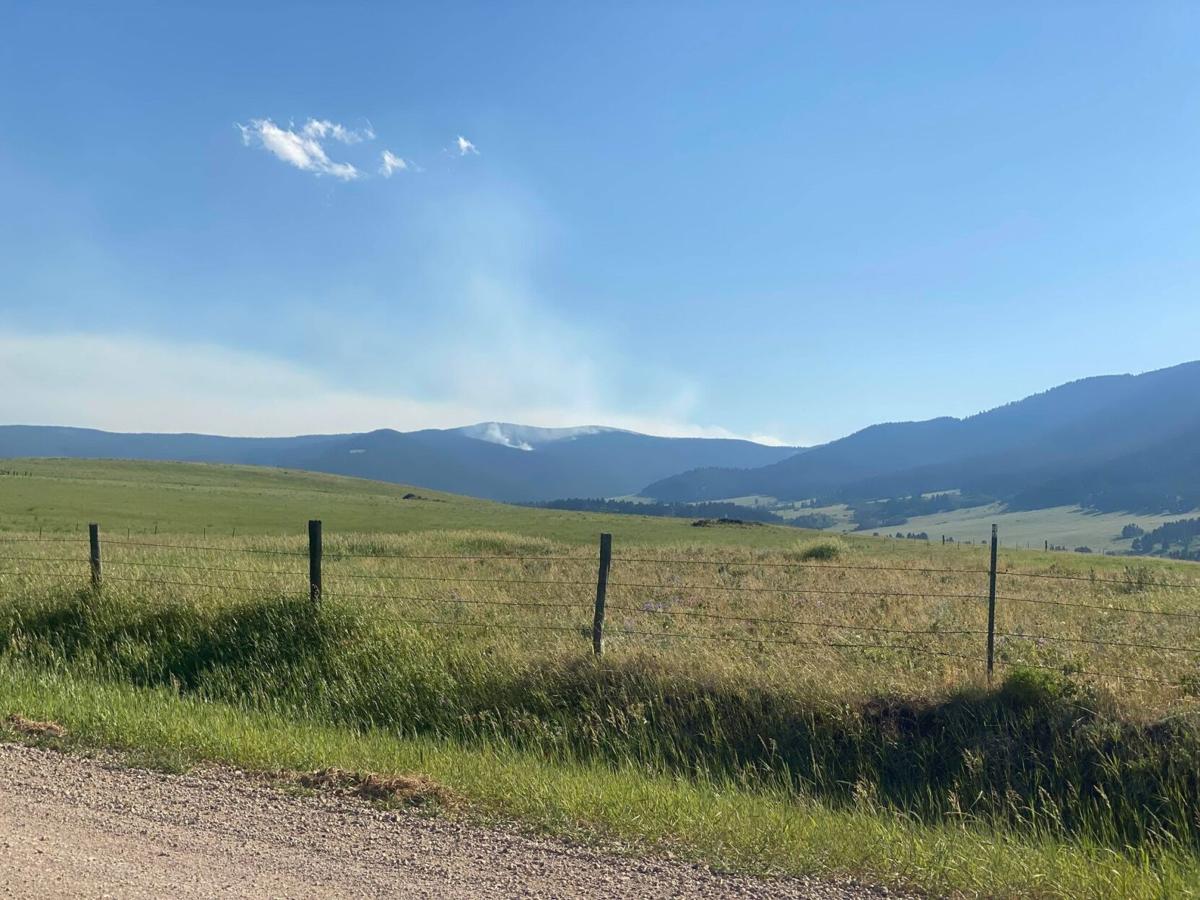 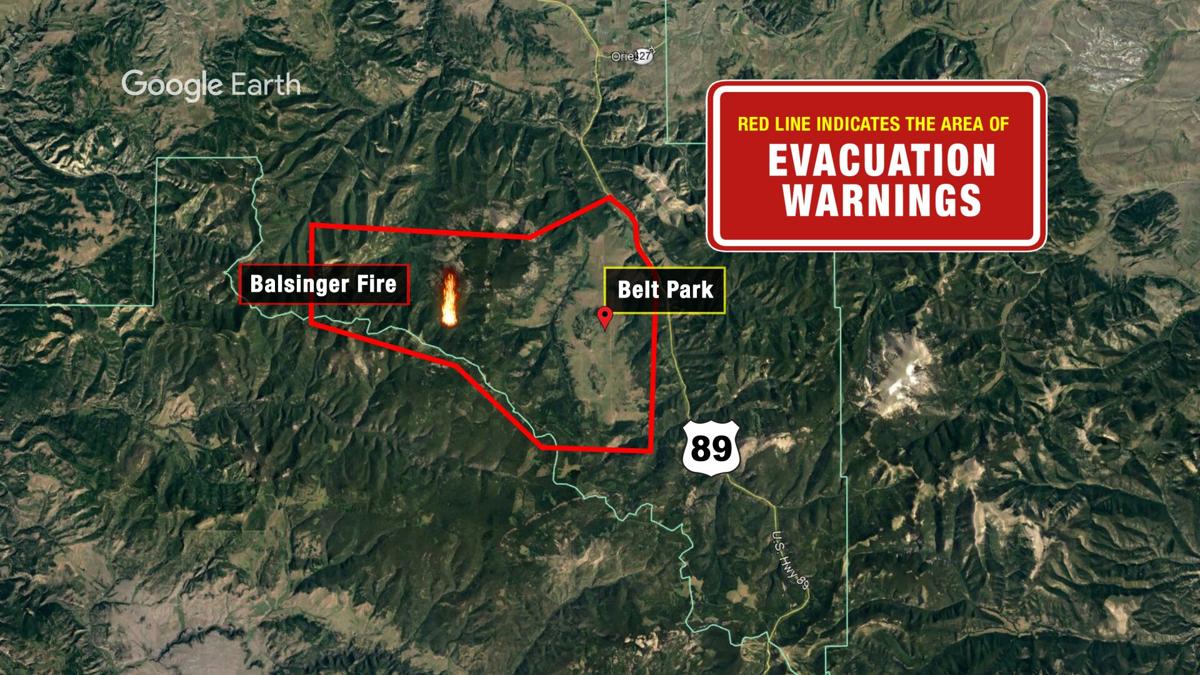 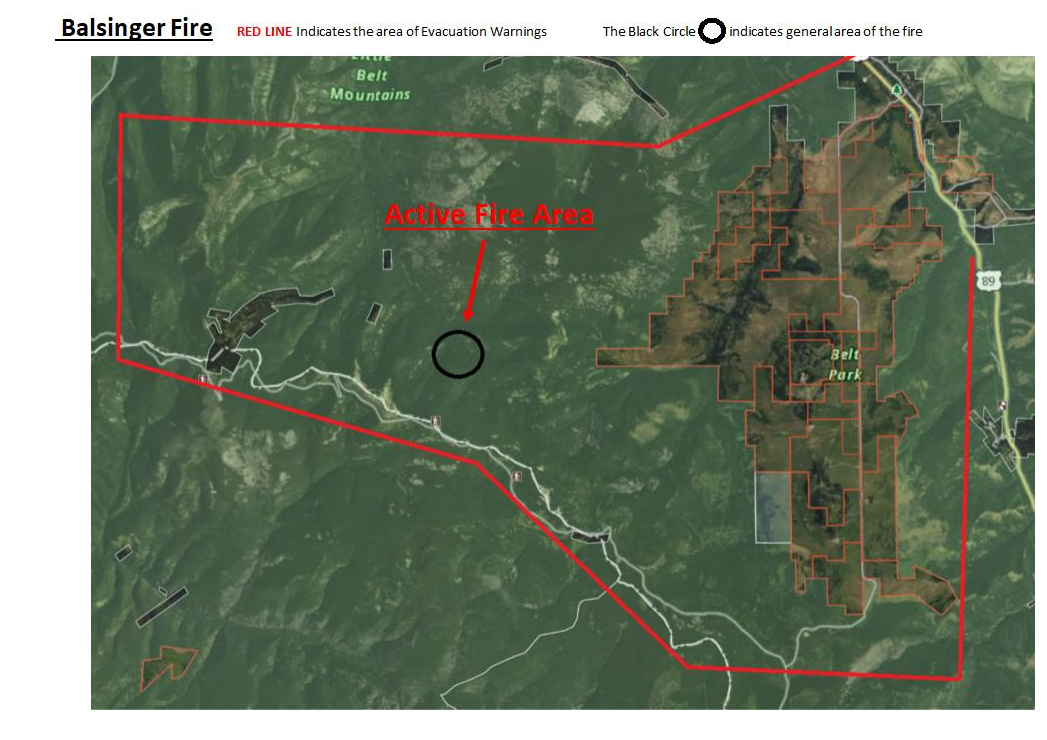 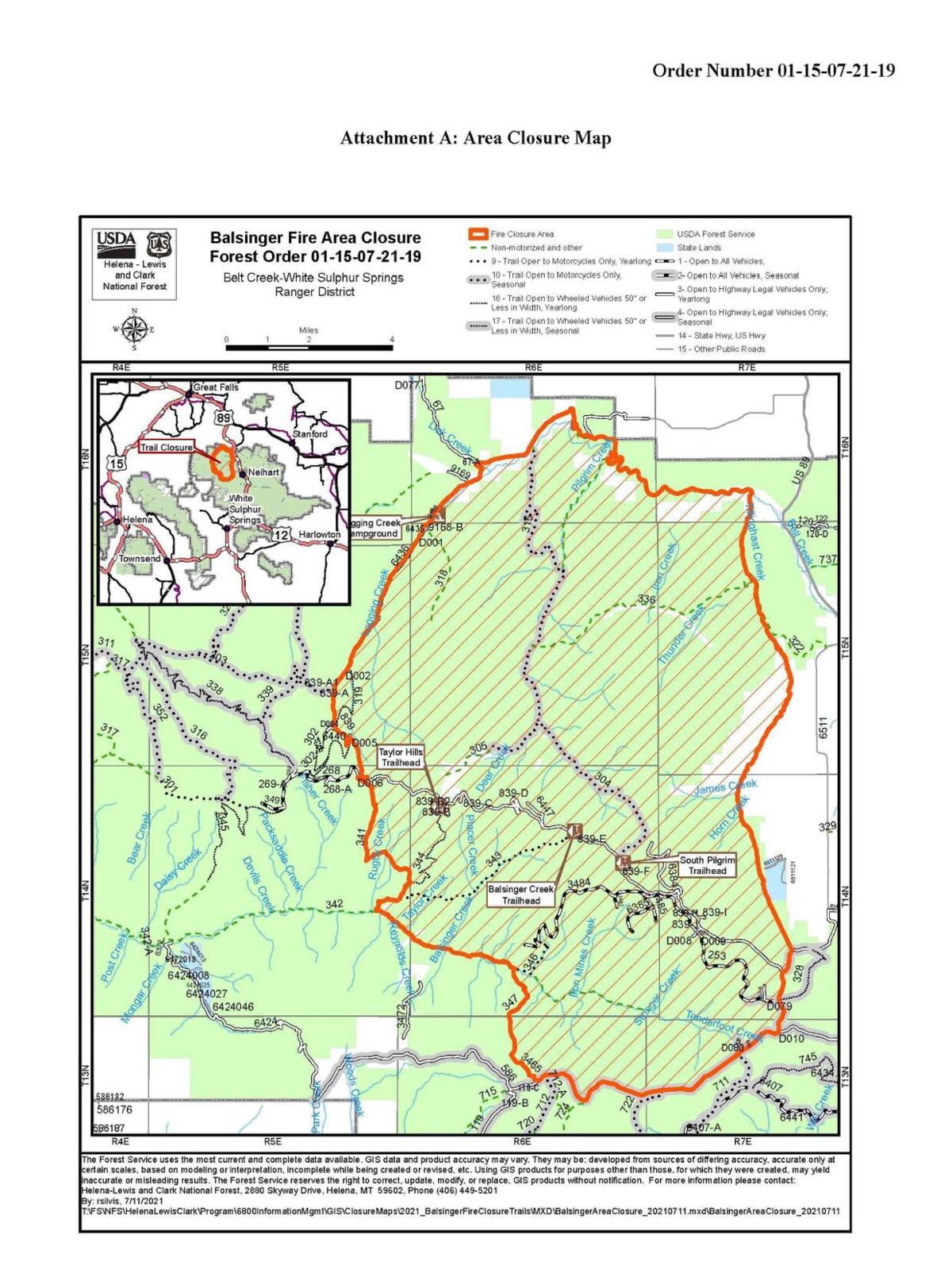 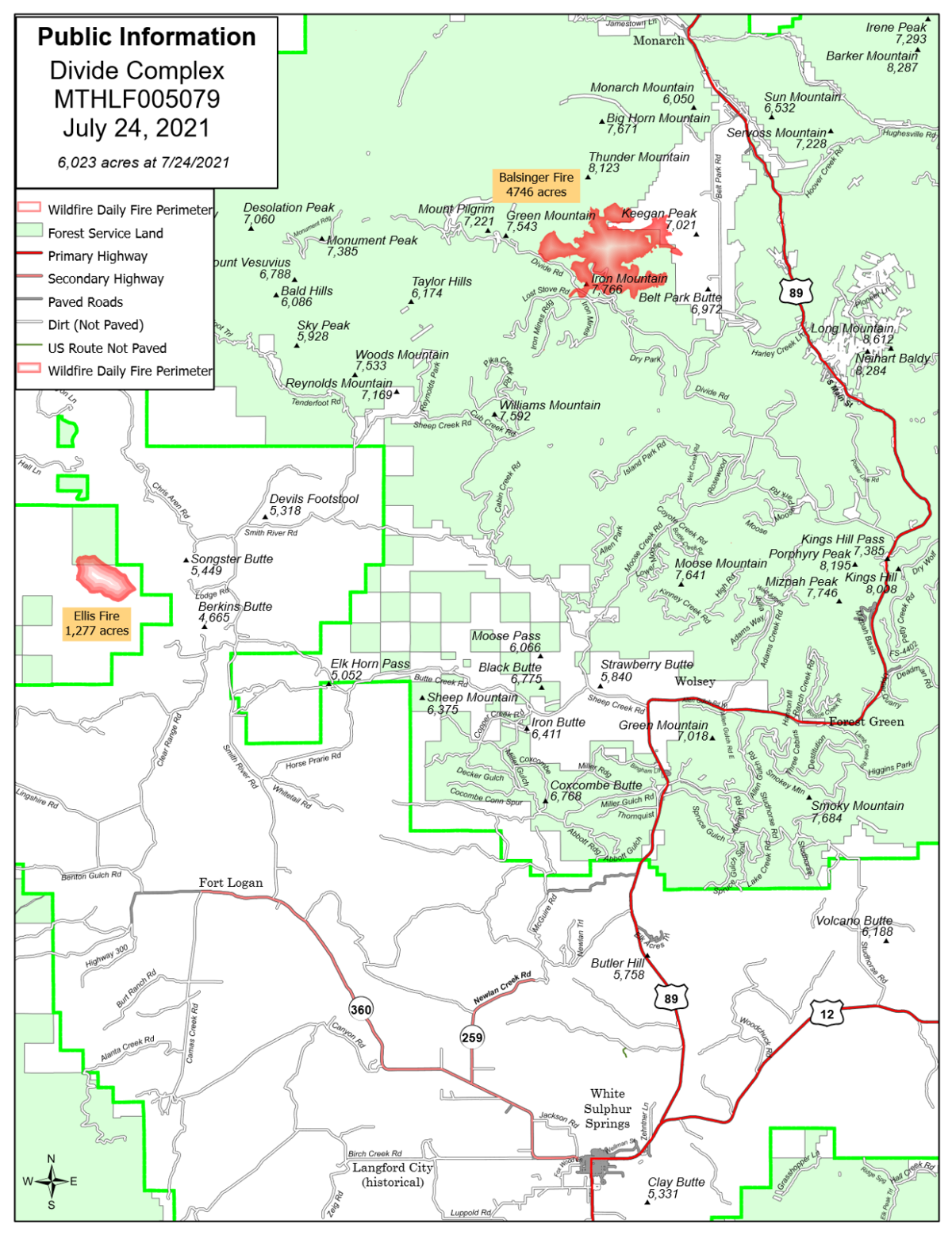 Fires within the Divide Complex grew substantially Friday, with the Balsinger Fire nearly doubling in size in six hours.

Firefighters worked to tie in a dozer line in the Wilson Park area to Belt Park for a solid containment line and retardant drops slowed the fire’s movement east.

The evacuation order for Belt Park, issued by the Cascade County Sheriff’s Office, is still in place as of an update Sunday morning.

On the Ellis Fire, firefighters worked Saturday on rehabilitating interior line and patrolling for hotspots and anything threatening containment lines.

On Sunday firefighters will continue to repair and rehabilitate firelines and hold and improve containment lines.

According to InciWeb, the American Fork Fire is actively spreading southwest into the Sheilds Creek Drainage, which is home to the endangered Yellowstone cutthroat trout.

Firefighters extinguished hotspots on the northeast side Saturday, made progress on handline on the south side and worked with aircraft and hand crews to keep heat in check on the southern tip of the fire.

Pockets of fire on the northwest side near Lebo Peak put up visible smoke.

On Sunday, firefighters will continue suppression efforts on the east and south sides towards the 2017 Blacktail Fire footprint, holding constructed line along the east and preparing structure protection in the south.

Aviation resources will pick up spot fires and aid in suppression on the north, south and west.

Several spot fires Friday caused the Balsinger Fire to grow past James, Horn and Tillinghast Creeks into Belt Park, causing the Cascade County Sheriff’s Office to issue an evacuation order in the area.

The Balsinger Fire is now at 4,746 acres with 0% containment.

Firefighters will continue to secure protection, securing and strengthening existing firelines, and preparation work along Divide Road in anticipation of the fire’s potential movement in that direction. Their objective remains to keep the fire north of Divide Road Saturday.

On the Ellis Fire yesterday, firefighters picked up hotspots and continued to repair and rehab firelines according to an update from the Southern Area Incident Management Gold Team.

Resources on the Balsinger Fire will focus on securing/mopping-up existing fireline and continuing fuels reduction for the next operational period according to an update Wednesday.

Multiple types of equipment are being used along the Divide Road to prepare for holding operations.

Ignitions will be used to meet objections if conditions allow.

Mop-up and securing existing fireline continues on the Ellis Fire, with personnel planning to rehabilitate firelines and collect and transport used supplies off the fire.

Two Type 2 helicopters and one Type 1 helicopters are available for bucket drops and other support missions the update said.

A community meeting is planned for Monday, July 19 in Neihart Community Park regarding the Divide Complex.

The meeting will begin at 4:00 pm, and seating is limited. Those interested in attending the meeting may bring their own chair.

Representatives from the Incident Management Team and the Forest Service will be at the meeting to answer questions.

Resources working on the Balsinger Fire Sunday will focus on securing/mopping-up existing fireline, fuels reduction on the Divide Road and suppression of the northern flank.

Crews on the Ellis Fire are working on mop-up and securing existing fireline.

The National Preparedness Level was elevated to Level 5 for the Divide Complex, which is the highest designation according to the U.S. Forest Service.

“Level 5 is the highest designation and is based on a combination of the number of committed firefighting resources in multiple geographic areas and the availability of additional resources,” an update from the U.S. Forest Service said.

A total of eight engines, one Type 5 engine and seven Type 6 Engines are on the scene of the Balsinger Fire.

Additional resources include one Type 1 hotshot crew, two water tenders and one dozer.

A total of 87personnel are assigned to the Balsinger Fire.

A pre-evacuation order was placed for the Smith River corridor from Camp Baker in the south to Blacktail Creek to the north.

As of Saturday morning, the Iron Mines Fire is being monitored by air resources and ground resources from the complex will be assigned as needed.

Currently, there are 192 personnel assigned to the Divide Complex.

An update on the Divide Complex sent Tuesday says good progress was made Monday on the Ellis Fire, which is now 10 percent contained.

The release says the addition of more engines, one skidgen, and 2 dozers was critical in the effort to secure the east and north flanks of the Ellis Fire to keep it from spreading closer to structures.

Early morning winds resulted in fire activity with the Balsinger fire to pick up earlier than in previous days, which resulted in a prominent smoke column mid-day.

Most activity was within the fire’s existing perimeter, burning areas between the spot fires.

Engines were focused on assisting with structure protection should the need arise in the Belt Park area.

A spot fire was established on the south side of Divide Road, FS Road 839.

An air tanker performed drops on the spots south of Divide Road, and was successful in its primary mission in protecting the structure along Divide Road according to the update.

Scattered showers and thunderstorms are likely over the burn area Tuesday and some storms could produce brief heavy rainfall and strong wind gusts.

You can view the showers via live webcams from Into the Little Belts here.

Due to smoky conditions from several fires in the region, fixed wings and LAT were not able to complete their mission.

The Ellis Fire is now reported to be 2,500 acres large.

Very little fire activity was reported with the Balsinger Fire Sunday before 4:00 pm, and crews focused on reinforcing the fire line on Divide Road.

High winds in the late afternoon and the variable nature of the fire’s movement forced fire personnel to evacuate the area.

Spot fires were reported on and a half to one mile ahead of the main fire’s perimeter and the fire reportedly pushed northeast and then south, and the incident command called for the evacuation of Belt Park.

Following the evacuation, the fire grew one to one and a half miles moving downhill through hold growth sub-alpine timber.

As of early Monday morning, the fire has not crossed south of Divide Road, FS Road 839.

The Balsinger Fire closure area has been expanded by the Helena-Lewis and Clark National Forest.

“Our highest priority is the safety of our communities and firefighters,” said Agency Administrator Carol Hatfield.  “This expanded closure area will help ensure visitors are away from the fire should winds change direction and better enable our firefighters to utilize roads around the perimeter of the fire.”

The following is from an update regarding the closures from the Helena-Lewis and Clark National Forest:

To view a description of the closure and a full-sized map, click here.

An evacuation order has been issued by the Cascade County Sheriff’s Office for residents of Belt Park.

The evacuation order is due to fire activity with the Balsinger Fire northwest of Neihart.

A pre-evacuation notice has been issued for Smith River corridor from Camp Baker to the confluence with Blacktail Creek.

The Meagher County Sheriff’s Office reported the notice, saying the Ellis Fire has strong potential to spread north and/or northeast.

The U.S. Forest Service - Helena National Forest is reporting a new area closure is planned for the Balsinger Fire which is part of the Divide Complex and is burning west of Neihart.

Barriers will be placed at the following locations:

As of an update from the U.S. Forest Service Sunday afternoon, the Balsinger fire is 229 acres large and is not contained.

There are four engines, AI module and a Type 2 tender on the Balsinger Fire, and a total of 29 personnel are assigned to the fire.

Crews are continuing to secure the line on the North and West flanks of the fire Sunday.

The Ellis Fire is reported to be 216 acres large and not contained as of Sunday’s update.

There are a total of six engines, one Type 2 Initial Attack, and 2 dozers assigned to the Ellis Fire.

Hand crews and dozers are constructing line where possible.

Air resources are being shared between the two fires. A T-912 Airtanker dropped a perimeter of retardant on Saturday and will continue to assist on Sunday.

A red flag warning is in effect on the Divide Complex from noon to 9:00 pm.

As of an update from the USDA Friday morning, the Balsinger fire is reported to be compromised of mainly three large spots over about a 150-acre spread, one 35-40 acre spot, one 20 acre spot and another approximately 2-acre spot.

Crews have started working the west and south side of the larger fire spots and helicopters have been providing bucket support.

More resources have been ordered to help with the fire that are anticipated to arrive Saturday.

The Ellis Fire is estimated at 110 acres and crews have been working with Rockin C Ranch along the perimeter of the fire.

The Iron Mines Fire is estimated to be 0.4 acres large.

A short crew sawed and dug line around this fire and will check it again Saturday according to the update.

The three fires are being managed together as the Divide Complex by local staff from the Helena-Lewis and Clark national forest, neighboring forests, and Montana DNRC.

“With many large incidents nationwide, resources are spread thin,” the USDA’s update reads.

Fire weather for the Balsinger Fire is anticipated to be mild to hig 70’s with light winds out of the west-southwest and 15 to 30 percent relative humidity.

The Ellis Fire weather is expecting low to mid 90’s with light winds out of the south-southwest and 8 to 13 percent relative humidity.

As of Saturday afternoon, a closure has been issued for the Balsinger Fire area and will be in effect until July 31.

As of an update from the Helena-Lewis and Clark National Forest Friday evening, a new closure order is in place for the Balsinger and Iron Mine fires.

“We are using a full suppression strategy to manage these fires that are currently burning west of the White Sulphur, Monarch, and Neihart communities,” said Agency Administrator and District Ranger Carol Hatfield. “With many large incidents nationwide, resources are spread thin.”

As of Friday morning, the Balsinger Fire is still estimated at 50 acres.

Helena-Lewis and Clark National Forest gave an update on the fire Friday morning, saying the Balsinger Fire and two other fires in the Belt Creek White Sulphur Ranger District, the Ellis Fire which is 110 acres and the Iron Mines Fire which is less than an acre large, are being managed together.

A fourth fire reported Thursday evening, named the Den Gulch Fire or the Middle Fire, is no longer a concern according to the update.

BELT PARK, Mont. - Cascade County Sheriff Jesse Slaughter said they were made aware of a forest fire near Belt Park.

According to the Helena-Lewis and Clark National Forest, the fire started near the South Pilgrim Trailhead, and pre-evacuation has been ordered for the west side of Belt Park subdivision to Highway 89 and all of the Deer Creek Estates subdivision.

The fire is active on all fronts and the Forest Service is Actively Fighting the fire with one tanker and one helicopter.

For updates on the Balsinger Fire, visit inciweb.nwcg.gov.

Article updated at 7:12 p.m. with a correction from Jesse Slaughter saying evacuation warnings were given out.

Blasinger Fire closure as of July 10