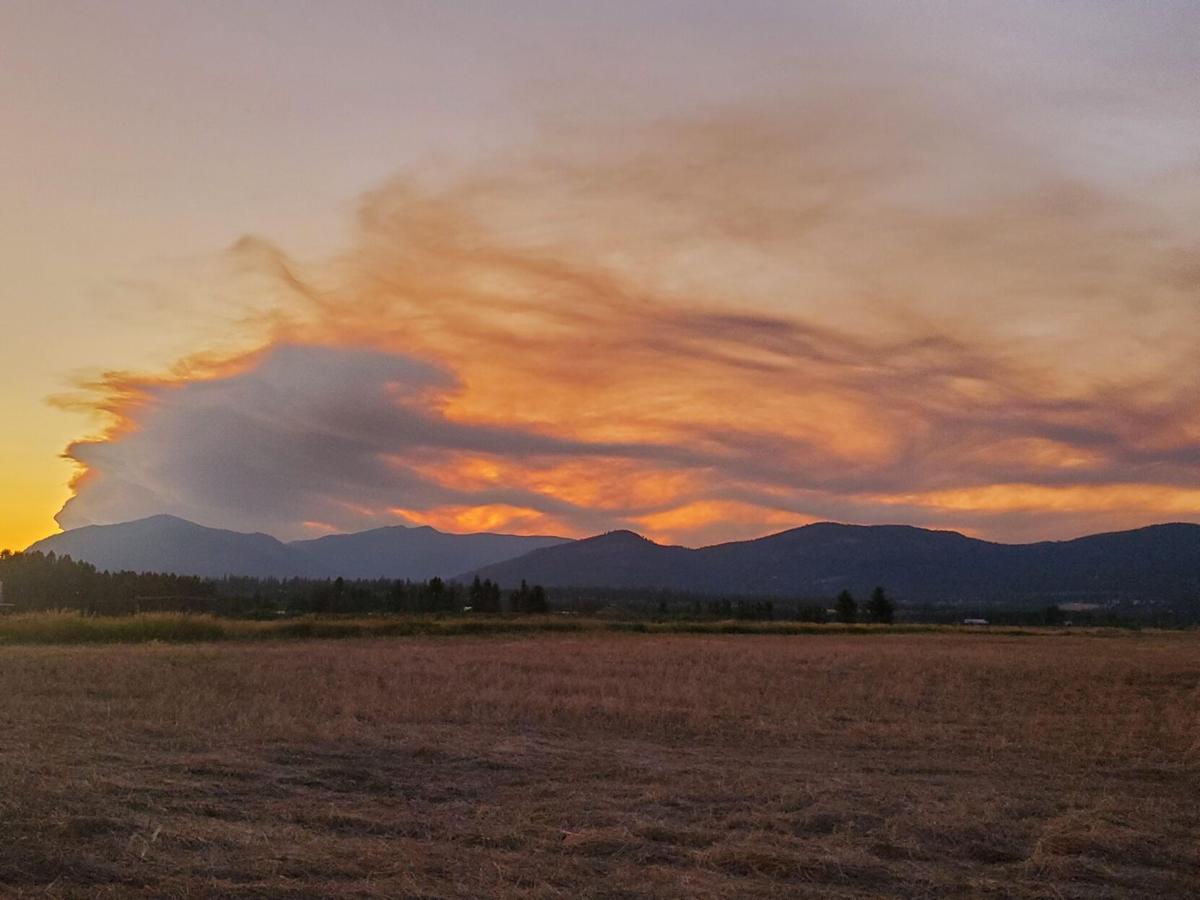 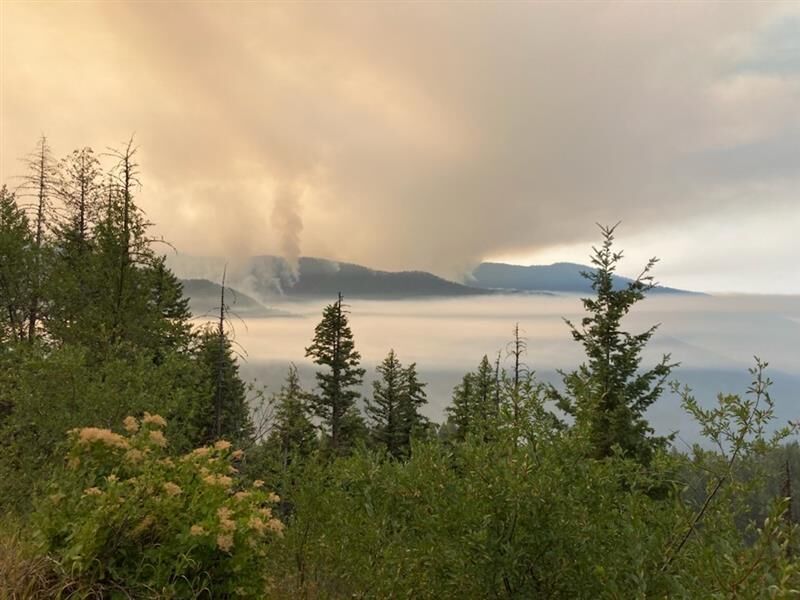 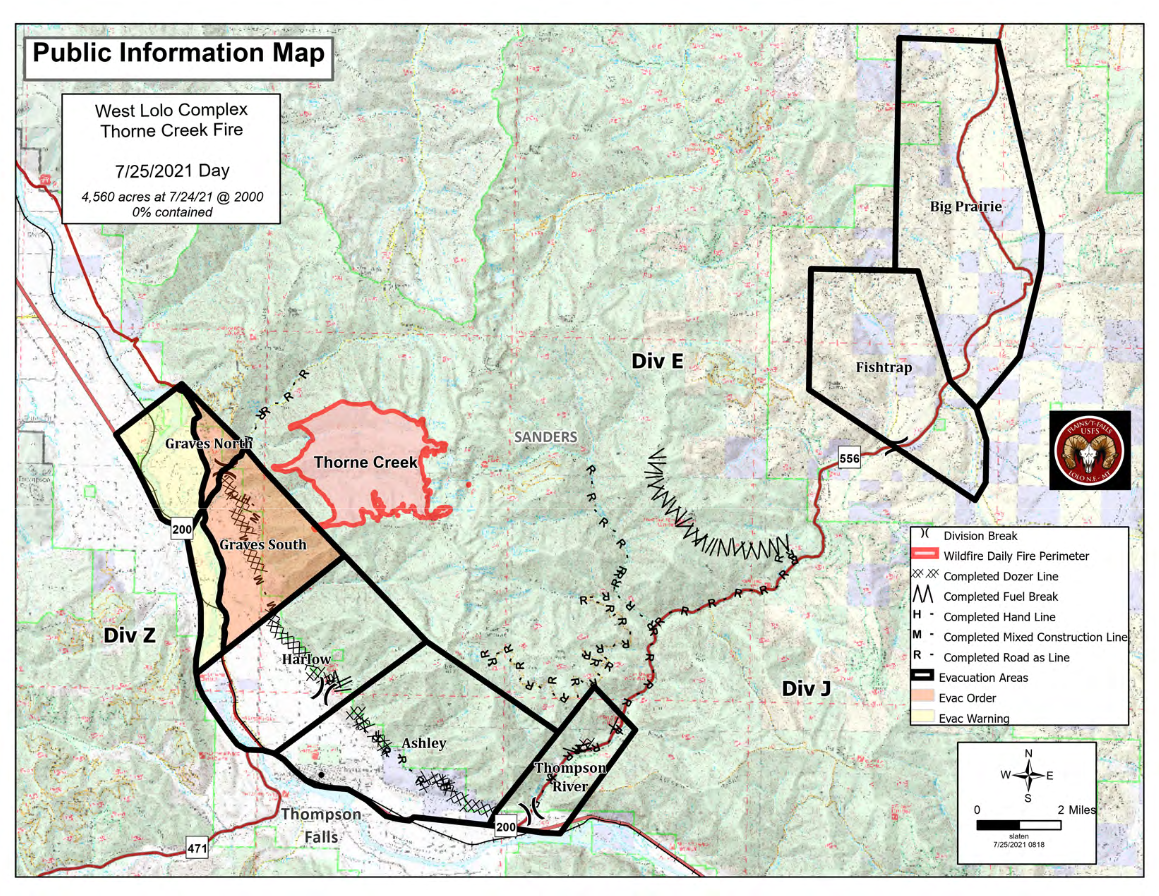 All residences of the east side of Blue Slide Road in Graves North and Graves South areas have been ordered to evacuate by the Sanders County Sheriff’s Office.

According to an update on InciWeb, the areas under this evacuation order are described as “from Cougar Creek south to the intersection of Blue Slide Road and River View Lane.”

Deputies will be going door-to-door to notify residents in the area.

Security measures are in place to protect private property.

A community meeting will be held Sunday at 6:00 pm at Ainsworth Park in Thompson Falls that will be recorded and available for viewing on the West Lolo Complex Facebook and YouTube sites.

Hoses, pumps, and water handling equipment are in place on the fireline and around structures and are ready to be charged and deployed as needed the update says.

Fire crews are prepared to coordinate with air resources for aerial ignition operations from Winniemuck Creek to Squaw Creek.

The Thorne Creek Fire is five miles northeast of Thompson Falls and was caused by lighting. As of Sunday morning, the fire is reported to be 4,560 acres large and 0% contained.

An evacuation warning has been issued by the Sanders County Sheriff’s Office for the “Graves North” and “Graves South” areas.

According to an update from the Plains/Thompson Falls Ranger District, the area is described as, “from Cougar Creek south to the intersection of Blue Slide Road and the railroad tracks.”

Pre-evacuation information will be gathered by deputies from residents as they work through the areas door-to-door beginning Friday.

A community meeting is being held at the fairgrounds in Superior on Sunday, July 11 at 6:00 pm regarding the fires on the Lolo National Forest.

The meeting will be open to the public and will be streamed live to the West Lolo Complex Facebook page.

According to an update sent Friday morning by the U.S. Forest Service, the Sunset Fire is 10 acres large and the Deep Lookout Mountain Fire is 55 acres large.

Firefighters successfully completed containment lines on the Thompson Fire Friday and the fire is contained.

Resources made good progress to gain access into the Sunset and Deep Lookout Mountain Fires with heavy equipment the update said. Resources used helicopter bucket drops and retardant on both fires to help cool down the fires’ edge and slow the spread.

The Sunset Fire was accessed by firefighters Friday and crews focused efforts on a spot to the east of the main fire’s perimeter. A fire line was successfully constructed around the spot fire’s perimeter.

On Saturday, firefighters will concentrate on the main fire and constructing fire line around the perimeter.

The update says the Deep Lookout Mountain Fire burned actively Friday and is anticipated to do so Saturday. Firefighters gained access Friday and began building fire line along the fire’s perimeter.

The use of aerial resources and the work firefighters accomplished Friday has provided the opportunity for firefighters to make good progress constructing fire line Saturday.

Aerial resources will continue to be used on both fires to slow the spread as firefighters work to build containment lines.

Containment lines were completed on the Quinn and Sheep Fires, and firefighters made good progress on the Siegal Fire, constructing containment lines starting at the south end and working on the east and west sides the update said.

Multiple road and trail closures have been issued in the Lolo National Forest.

The following is information on the closures from InciWeb:

Area Closure: All National Forest lands, roads and trails west of the Thompson River Road #56 (but not including the Thompson River Road), south of the Sundance Ridge Trail #433, east/southeast of the Vermillion-Headley Trail #528, northeast the Graves Vermillion Road #367, and north of the Lolo National Forest boundary at the southern line of Section 36 (T23N, R30W, Sec. 36). The Sundance Ridge, Vermillion Headley, and Graves Vermillion Roads are also closed.

As of Friday afternoon, all fires are being managed under a full suppression strategy and have been prioritized by the values at risk an update from Northern Rockies Team 1 said.

Area and road closures are to be issued in the coming days for areas impacted by fire on the Lolo National Forest according to the update. The closure order is anticipated to be between and including the Graves Creek Road, Marmot Peak trail, and Priscilla Peak/Sundance Ridge trail.

People are asked to keep an eye on the West Lolo Complex InciWeb and Facebook pages and the Lolo National Forest Webpage.

Limited firefighter resources are focusing their efforts on fires located on the Superior Ranger District due to the high probability of success in containing these fires which include Sunset, Thompson, and Deep Lookout Mountain.

A chance of thunderstorms across the fire area Friday is being reported, followed by a warming trend with hot dry weather this weekend continuing into next week.

Deep Lookout Mountain Fire: located on the upper reaches of the Deep Creek Drainage, north of I-90, 12 miles east of Superior, and five miles west of Stark Mountain Lookout.

Thompson Fire: The fire is located 2.5 miles southwest of Superior, MT on the east side of Thompson Creek, approximately 1.5 miles up the Thompson Creek drainage from Superior. The fire is holding at 3-5 acres.

Resources are working to gain access to the Sunset and Deep Lookout Mountain fires. Heavy equipment is being utilized to clear or improve existing roads to access the fires’ perimeter. It is anticipated that firefighters will gain access to these fires today and begin direct fire suppression efforts. Two Type 1 or Hotshot crews will arrive in the coming days.

Quinns Fire: Located about ½ mile east and on the ridge above Quinn’s Hot Springs

Sheep Creek Fire: located on the west of the Clark Fork River across from Quinn’s Hot Springs, ½ mile of the ridgeline, and visible from Highway 135 and Highway 200.

Aviation resources will be utilized on the fires in the Plains/Thompson Falls Ranger District to limit fires spread with water drops and retardant. Smoke will be visible from these fires and, at times, could be significant. Fire managers are continually monitoring all fires and will reprioritize the use of limited resources if values at risk change.

Firefighters are making good progress on the Sheep Creek and Quinns fires constructing containment lines around the fire perimeters. This suppression activity from yesterday will continue today. A plan is being developed for access to and suppression of the more remote Siegel Fire. Quinn’s Hot Springs is not threatened, no other structures or infrastructures are threatened, and there are no closures in place at this time.

Resources have been ordered and a plan is being developed for a full suppression response to Winniemuck, Thorne Creek, and Deep Creek fires.

Sanders County Wildland Fire Information (SCWFI) said in a Facebook post there are more than 20 fires that started in the Lolo National Forest, several are in Mineral County.

SCWFI said the fires burning in Lolo National Forest are in:

According to SCWFI, the Bone Fire in Swamp Creek burned four-fifths of an acre Tuesday and crews are monitoring it.

Crews put out the the Maiden fire which also covered four-fifths of an acre in the Thompson Falls area.

In addition, there are three fires in the Kootenai National Forest, according to SCWFI:

According to a Facebook post from Sanders County Wildland Fire Information, The Plains/Thompson Falls Ranger District is working to find and staff the fires.

Aerial resources and firefighters are on their way to battle the fires.

We will update with more information as it becomes available.