It was reported from Flathead County that it was an officer-involved shooting, but right now they are not releasing which agency the officer was with.

Flathead County Sheriff's office did not give an update on their investigation process, but as far as the victim who was killed in Great Falls, the Great Falls Police Department says an autopsy is being done and by next week Lieutenant Doug Otto says we could have answers.

"We're going to do a unified press release together from the coroner's side and the department's side so we can get a release out to everybody if they're willing with the victims' names, the manner of death, and all those different things there," said Otto.

GREAT FALLS, Mont. - Law enforcement say two people are dead, including the suspect, after a fatal 'domestic disturbance' turned into a kidnapping across county lines.

The Great Falls Police Department (GFPD) says they responded early Thursday morning around 12:30 am after getting calls about an incident near Sacajawea Elementary.

Officers found a body at the 3000 block of 6th St. NE, according to GFPD. By then, the suspect had taken someone hostage, driving away from Cascade County and traveling nearly 200 miles before other agencies helped stop him near the Cascadilla River Access Site right outside of Glacier National Park.

With the hostage now safe and the suspect dead, GFPD blocked off part of 6th St. NE from Sacajawea Drive all morning long with cars, barriers and police tape, keeping traffic out for their safety while investigating what they’re calling a homicide case.

While they didn't want to be on camera, one nearby neighbor says it felt surreal calling 911 after hearing screaming and sounds of gunshots soon after.

However, GFPD have yet to identify an official cause of death. "The autopsy will have to be completed, and more than likely that will be tomorrow but nothing is set yet," said Captain Doug Otto with GFPD Support Services.

The suspect drove through at least three other counties before reaching his final destination, says Flathead County Sheriff Brian Heino. Despite that, Heino explains they were able to find them thanks to quick communication with other first responders.

"We initially were contacted around five this morning advising that they were heading our way,” he said. “Those response of having those resources dramatically assisted us in being able to locate and find the victim of this kidnapping."

The suspect’s and victims' names have not been released for now. Otto and Heino tell Montana Right Now they may do so in the near future once they’ve coordinated efforts with other agencies first.

"That will be up to the coroner and working in conjunction with us before they release the identities of the individuals involved, but that has to be upon notification of family," said Otto.

"Once we feel it's the appropriate timeline to not inhibit the investigation or allow this individual some privacy at that point," said Heino.

Right now, there aren’t a lot of details on what happened near Glacier National Park and what led to the suspect's death, but officers tell MRN there is no current danger to the public.

With that said, Otto is asking everyone to send their thoughts and prayers with the victims, families and law enforcement in mind.

US Highway 2 from West Glacier to East Glacier has reopened, according to the Flathead County Office of Emergency Services (FCES).

FCES said in a release drivers should be careful east of Nyack Flats between mile markers 162 and 169 to let law enforcement officers finish their investigation. 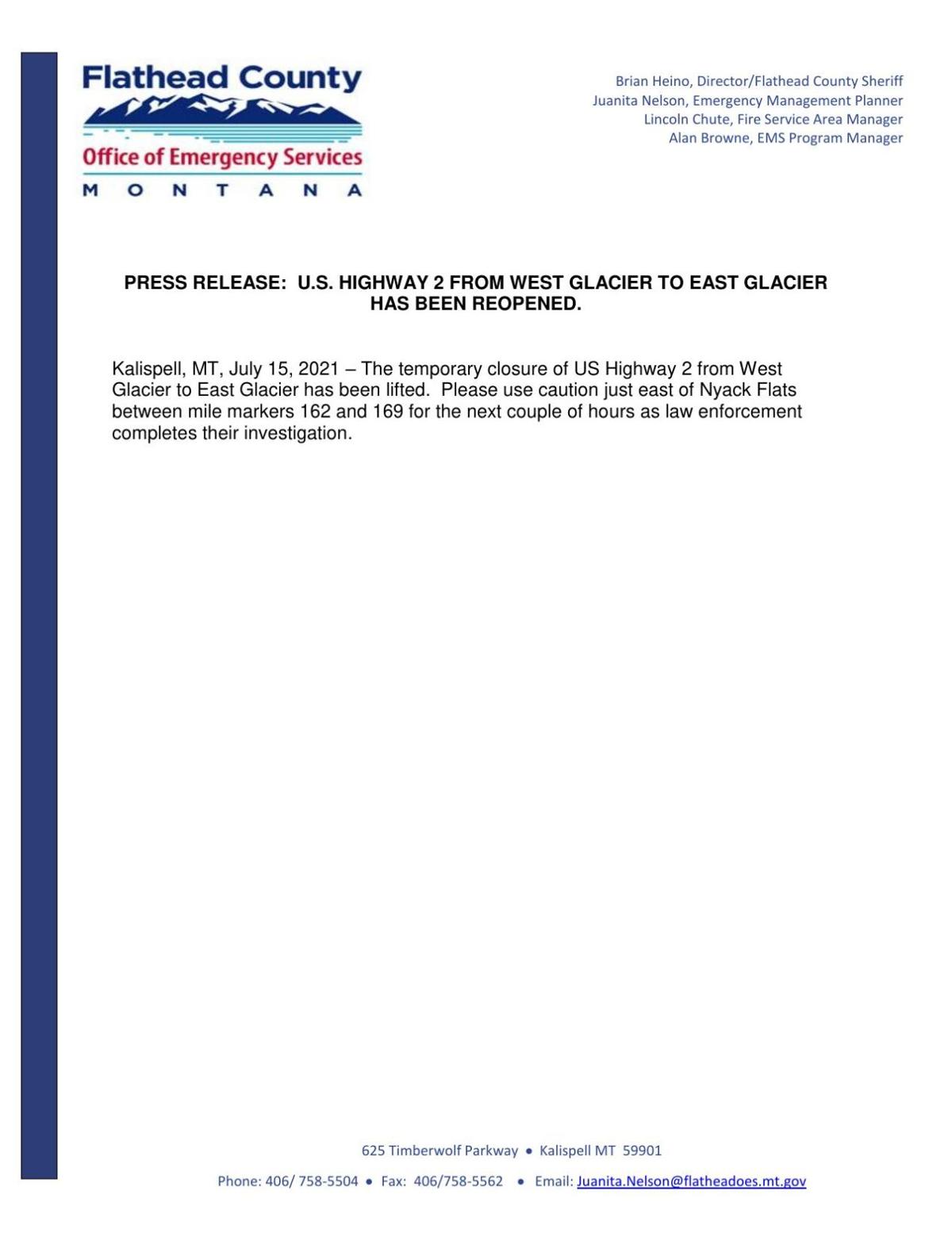 GREAT FALLS, Mont. - Police are investigating a homicide and kidnapping where the suspect allegedly fled Cascade County with a hostage.

According to a Facebook post from the Great Falls Police Department, officers responded to the report of a domestic disturbance in the 3000 block of Sixth Steet NE Thursday at 12:30 a.m.

GFPD said when officers arrived, they found one person dead, and found out the suspect took another hostage and left Cascade County.

At 6:20 a.m., law enforcement went on a prolonged pursuit that ended outside of Cascade County this morning.

GFPD said the hostage is safe and is with law enforcement officers.

The suspect has died and law enforcement are investigating a secondary death, according to GFPD.

The Flathead County Sheriff's Office confirmed U.S. Highway 2 from West Glacier to East Glacier is also closed as part of the ongoing investigation.

Police are unable to release additional information at this time. 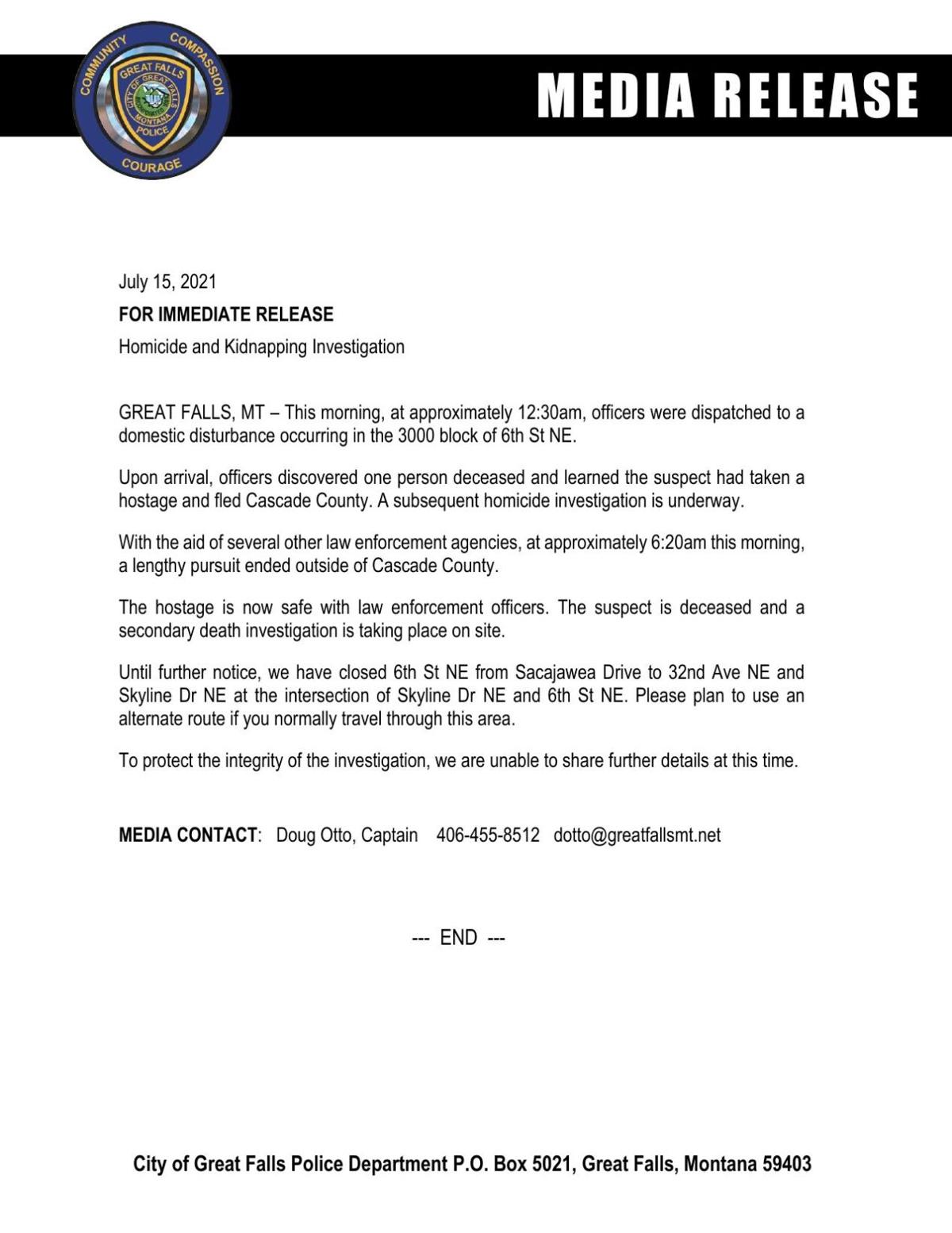 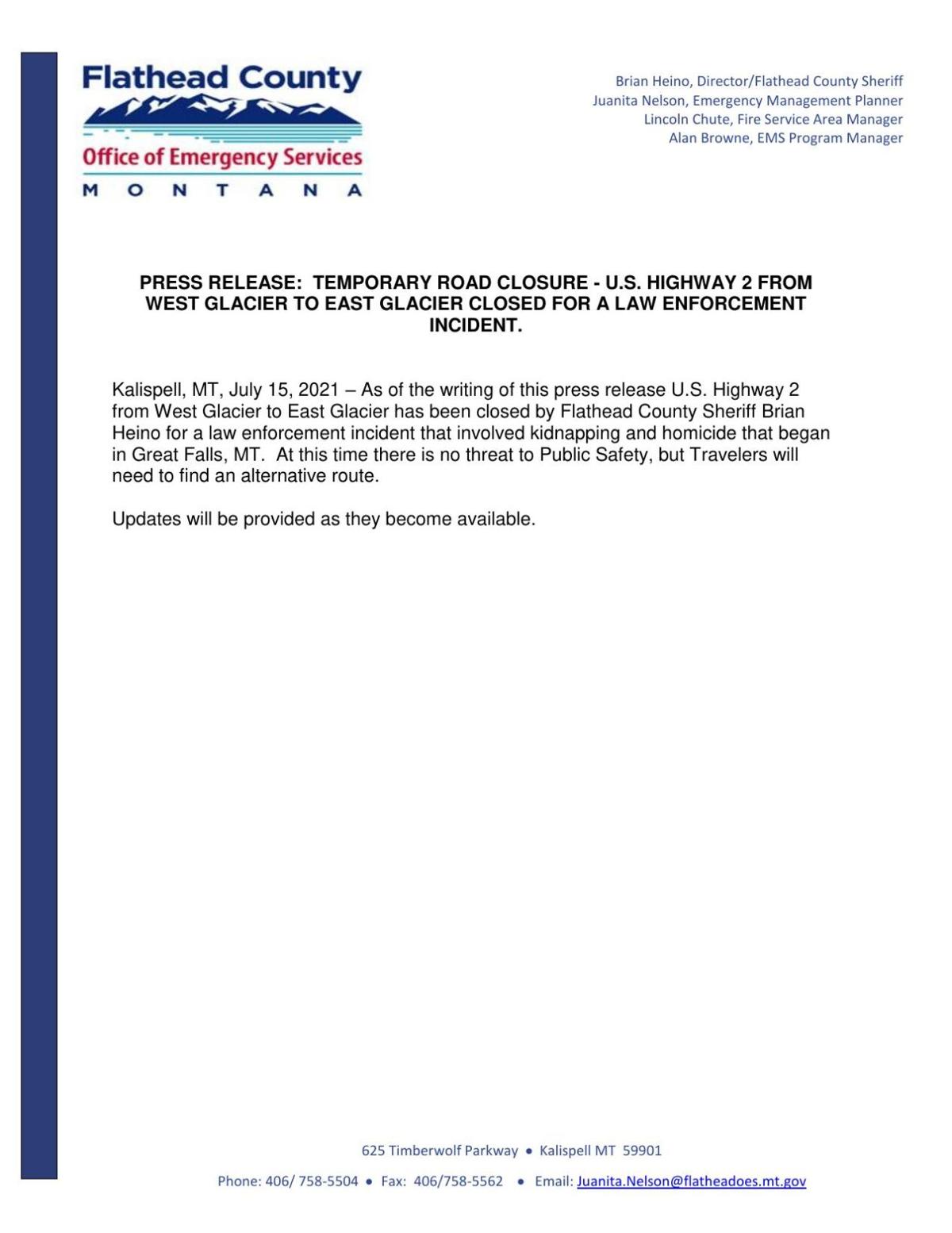 GREAT FALLS, Mont. – Police have identified the two people who died in an incident in Great Falls last week which included a police chase, a k…