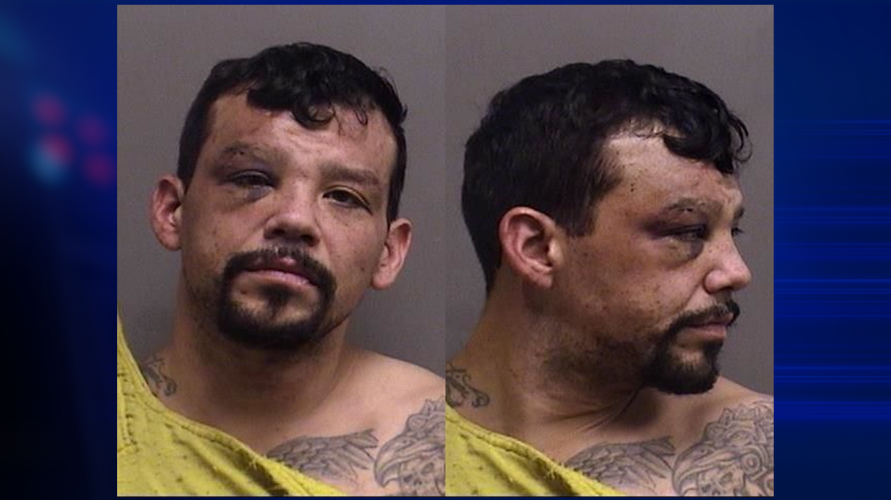 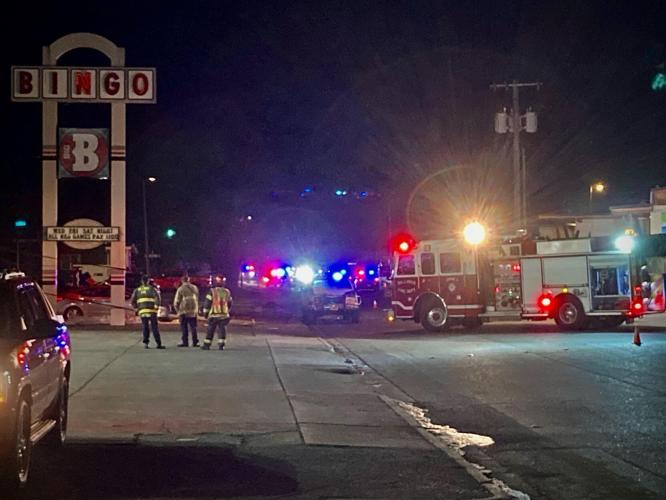 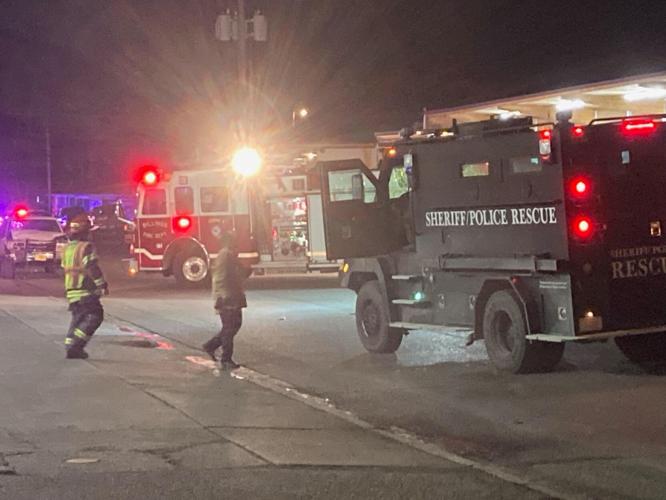 Charing documents have been shared for Thomas John Slevira Jr., who is facing charges for a Sunday night crime-spree in Billings.

The caller reported an unknown man kicked in the back door to the home and shot a man inside.

On scene, officers learned that the incident happened when occupants of the house were in the middle of a birthday party with about 25 people, several of which were children.

Witnesses said the man, identified as Thomas John Slevira Jr., violently forced his way through the back door, then fell down the stairs right inside the door.

Two adult men at the party went downstairs to see what was going on and confronted Slevira, who reportedly turned around with a pistol in his hand and shot one of the men in the chest.

Everyone in the basement then fled, while the man who was not shot got a firearm and stood at the top of the stairs to keep Slevira from leaving while everyone else evacuated the home.

When officers arrived, the man was able to get outside.

With Slevira still inside the home, officers tried to make their way inside, but Slevira began firing rounds out the front of the house.

People were cleared from the area and law enforcement began to secure the residence.

The man who was shot was taken to a hospital for his gunshot wound. His current condition is unknown.

Billings Police Department SWAT and their negotiator team were activated and brought to the scene, where a standoff situation began with Slevira barricaded in the basement.

During the standoff, officers determined a hit-and-run crash involving a Tahoe near the Big B Bingo on 12th St. West was possibly related to the incident.

Around the crash, officers saw syringes and a couple of firearms, documents say.

The registered owner of the car, Carlos Delao, was not with the vehicle, and when officers went to his residence on Ave. F, they found Delao deceased with an apparent gunshot wound to his head.

SWAT operators made several attempts to make contact with Slevira and eventually deployed chemical agents into the residence to try and get him to exit.

The standoff ended after seven hours when Slevira came out of the basement following commands before trying to flee.

Slevira was physically restrained by SAWT members and he was taken to St. Vincent Healthcare to receive care for injuries he sustained during the crash.

Documents say Slevira was on Department of Corrections conditional release at the time of the incident, and Probation and Parole Officers remained with him during his stay at the hospital.

Surveillance was later obtained from Delao’s residence, which showed Slevira checking the driver’s door of a vehicle.

A motion light turned on, and Slevira ducked and moved to the back of the driveway where the car he stole, a Chevrolet Tahoe, was parked.

A second camera showed Delao was in the driver’s seat of the Tahoe and that it was running while Slevira was in the area.

Slevira approached the driver’s door of another vehicle and could be seen grabbing the other vehicle’s door and pulling a pistol out of his coat pocket before noticing the Tahoe was running.

He then moved around the backside of the Tahoe’s driver’s door, opened it, and almost immediately, a single gunshot could be heard on the video.

Delao was pulled out of the vehicle and Slevira got in and sped away.

The stolen Tahoe was then taken south on 12th St. West before crossing Grand Ave., and Slevira crashed the car into a telephone pole and cars at Big B Bingo.

Witnesses and additional video surveillance show Slevira running from the crash across 12th St. West and check the doors of a business on Grand Ave. before entering the backyard of the residence on Burlington Ave.

A spent SIG 9mm Luger cartridge case was found under Delao’s body, and a shoe print that matched Slevira’s shoes was found where the Tahoe was parked.

A search of the Burlington Ave. house found four spent 9mm cartridge casings outside. Detectives believe Slevira shot at several dogs that were in the backyard.

Inside the house, a Springfield 9mm Hellcat semi-automatic pistol was located that was previously reported as stolen, as well as two magazines for the pistol, one empty and the other with three live rounds in it.

Two days after the incident on Jan. 10, law enforcement was dispatched to St. Vincent Healthcare for a disturbance involving Slevira, who reportedly tried to escape but was stopped by a probation officer.

This led to a physical altercation as Slevira tried to grab the officer’s firearm and Slevira was tased by hospital security before being secured.

Slevira was then taken to the Yellowstone County Detention Facility.

The Billings Police Department (BPD) has shared more information on a homicide and standoff last weekend.

Slevira was taken from the hospital to the Yellowstone County Detention Facility on Jan. 10 where he was held on a Department of Corrections hold until the formal charges could be filed.

BPD says an investigation into the case is still ongoing, and that there is a possibility of more charges being filed at a later date.

Hoffman says the cause of death was a single gunshot wound to the head.

The suspect arrested by Billings Police late Monday morning has not yet been charged, but is in custody.

The investigation is ongoing.

The following is a release from the Billings Police Department:

At 6:09 PM hours, Officers responded to the 1200 block of Burlington for reports of a shooting. The male victim of the shooting was transported privately to the hospital. Officers arrived on scene and determined the suspect was still inside the residence and all of the residents had fled the scene. The suspect continued to fire shots from the residence. No one was struck by these shots.

Billings Police patrol was able to secure the area and the residence while BPD Swat, negotiators, bomb squad, and YSCO Swat were activated. In doing this a second crime scene was located at the business lot of 1307 12th Street West was located. Initial investigation of this scene determined the suspect had crashed a vehicle into several parked vehicles and then fled the area on foot, ending up at the residence on Burlington.

Officers then responded to a residence in the 1200 block of Avenue F due to information received from the suspect vehicle involved in the crash. Officers on this scene located a deceased male. The initial investigation on this scene appears the suspect shot the victim and then stole this victim’s vehicle, which was the same vehicle involved in the crash at 1307 12th Street West.

At this time there does not appear to be any connection between any of the victims and the suspect.

Throughout the entirety of the standoff Officers attempted contact with the suspect and received no cooperation. At approximately 1:00 AM Officers were able to determine what part of the residence the suspect was barricaded in and focused their efforts causing the suspect to begin to cooperate. The suspect was located in the residence and taken into custody without any further injury or shots being fired.

The suspect was transported to the hospital due to injuries sustained in the vehicle crash and is currently being detained there on the suspicion of deliberate homicide, attempted deliberate homicide, and robbery. A suspect identity will be released once official charges have been filed."

The suspect of the standoff at 1200 block of Burlington Avenue Sunday night is a 32-year-old man, Sgt. Eric Schnelbach told NonStop Local. Sgt. Schnelbach also said the suspect was an absconder from parole.

Schnelbach said preliminary investigation shows the suspect came to residence where there was a birthday party, and it appears he did not know anyone there.

There were many kids and adults at the party, Schnelbach said, and the suspect shot at a man and barricaded himself in the basement.

The victim was brought to the hospital.

Schnelbach said, to his knowledge, no one else was injured, and the other people were able to evacuate.

All roads are now open. Detectives are still at the scene investigating.

UPDATE 1:05 AM (1/9): The suspect who barricaded himself in a residence for several hours has been arrested.

Lt. Matt Lennick tells NonStop Local that the suspect was taken into custody after "hot gas" was deployed and three teams of officers stormed the house.

He went on to say that there were no shots fired by either party during the incident, and no one else was injured.

BPD investigators will now take over the scene.

*Update* The susp has been taken into custody. No further shots or injuries to either Officers or the suspect. - Lt. Lennick https://t.co/YGnlH8AosY

Lennick says there's limited information available about the suspect right now, including his identity, whether he had a firearm or injuries

The scene's large span of the area will have the neighborhood shut down for an extended period of time while investigators piece together what happened. Expect delays and extended closures.

We will continue to update this story with the latest information.

Billings police are reporting the gunman barricaded in a residence is not cooperating with law enforcement.

Gas has been pumped into the residence, however, there has been no response from the suspect at this time.

It is unknown if the suspect is alive, however, law enforcement say they are not going to rush the situation and are using technology to get a look inside the residence.

Law enforcement also shared that there is a deceased man that appears connected to this situation.

The deceased victim was reportedly shot by the suspect, who then fled to Big B Bingo and Casino, got into a crash, and shot another man inside a home. The victim shot at the residence was alive and taken by medical teams.

We will continue to provide updates as they become available.

BILLINGS, Mont. - First responders are on the scene of a reported shooting at a birthday party on Grand Ave. in Billings Sunday night.

A heavy police presence can be seen in the area of Grand Ave. and 12th St. and people are being told to stay away.

The Billings Police Department (BPD) reports they responded around 6:09 pm to the 1200 block of Burlington Ave. and that a man was injured and transported by medical personnel. The victim is reported to still be alive.

As of 8:23 pm, the gunman is barricaded in a residence on Burlington Ave. There is believed to be nobody else in the residence BPD Lt. Matt Lennick said.

SWAT teams are on scene trying to make contact with the suspect inside. The Billings Police Bomb Squad and the Yellowstone County Sheriff's Office are also on scene.

BPD says the suspect did shoot out of the window around 30 minutes after the incident started, however, nobody was injured.

Our John Martin on scene reports there were several cars smashed and at least one telephone pole broken with active wires down in the area. NorthWestern Energy has turned off the power.

It is unclear at this time exactly where the incident took place.

This is a developing story, please check back for updates.

Burlington Ave. standoff suspect a 32-year-old man and absconder from parole, according to police