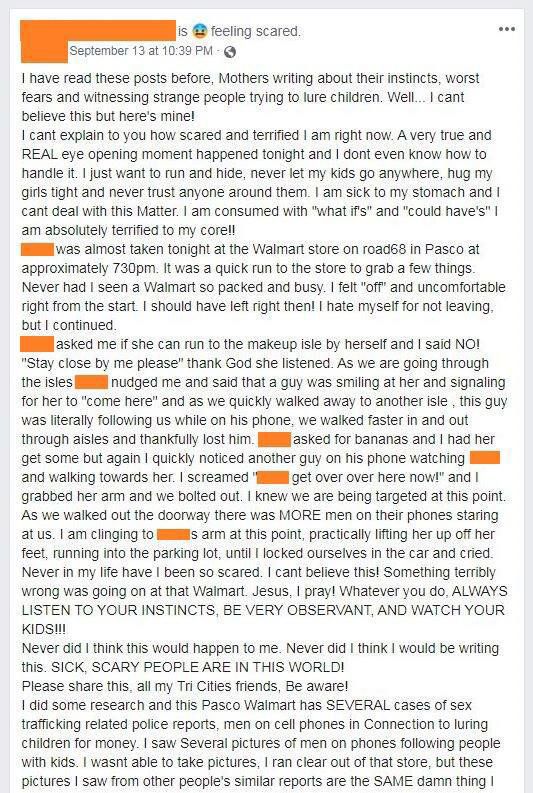 The original Facebook post shared over 1,600 times but later removed by the poster after they were contacted by Pasco Police. 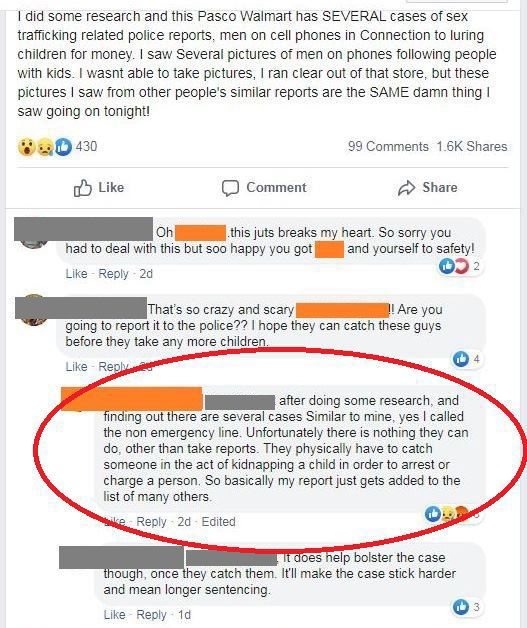 One instance of the poster stating that they had filed a report with Pasco Police, which the department confirmed was not true. 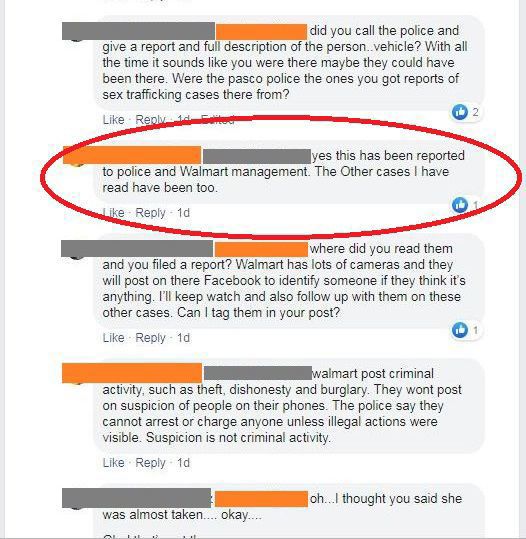 Another instance where the poster states they have filed a police report, which Pasco Police has said isn't true.

PASCO, WA - On Tuesday, Pasco Police posted on Facebook to correct lies recently spread on social media about the department, officers, and the Pasco Walmart regarding an alleged attempted luring at the Walmart.

The lies stemmed from a Pasco resident's Facebook post about an attempted luring at the Pasco Walmart. The post went viral over the weekend with over 1,600 shares, but was removed by the poster on Monday shortly after Pasco officers spoke with them.

Pasco Police say no attempted luring occurred. The post described men inside the Walmart on Friday evening, on their cell phones, who looked at the poster’s 12-year-old daughter. Police say the man described as following them around the store is actually shown on security video to be stationary and playing on his phone, only glancing up at the poster and girl as they walk past him, and not following them.

Pasco Police say the poster never reached out to them to file a report, despite stating multiple times on the post and in comments that they had. Officers first reached out to the poster on Sunday, and again on Monday morning about the inconsistencies after reviewing Walmart security video.

Police say the poster admitted “embellishing a lot” of the story when re-interviewed by police. They also admitted lying about contacting the police because they feared being judged harshly in the comments section.

Pasco Police also say the poster admitted that they did not abandon the cart and half-carry the daughter out to the car, where they sat and cried for awhile - as stated in the post. They in fact purchased their items, pushed the cart out to the car, and drove off.

Pasco Police have some suggestions for you in wake of this incident: