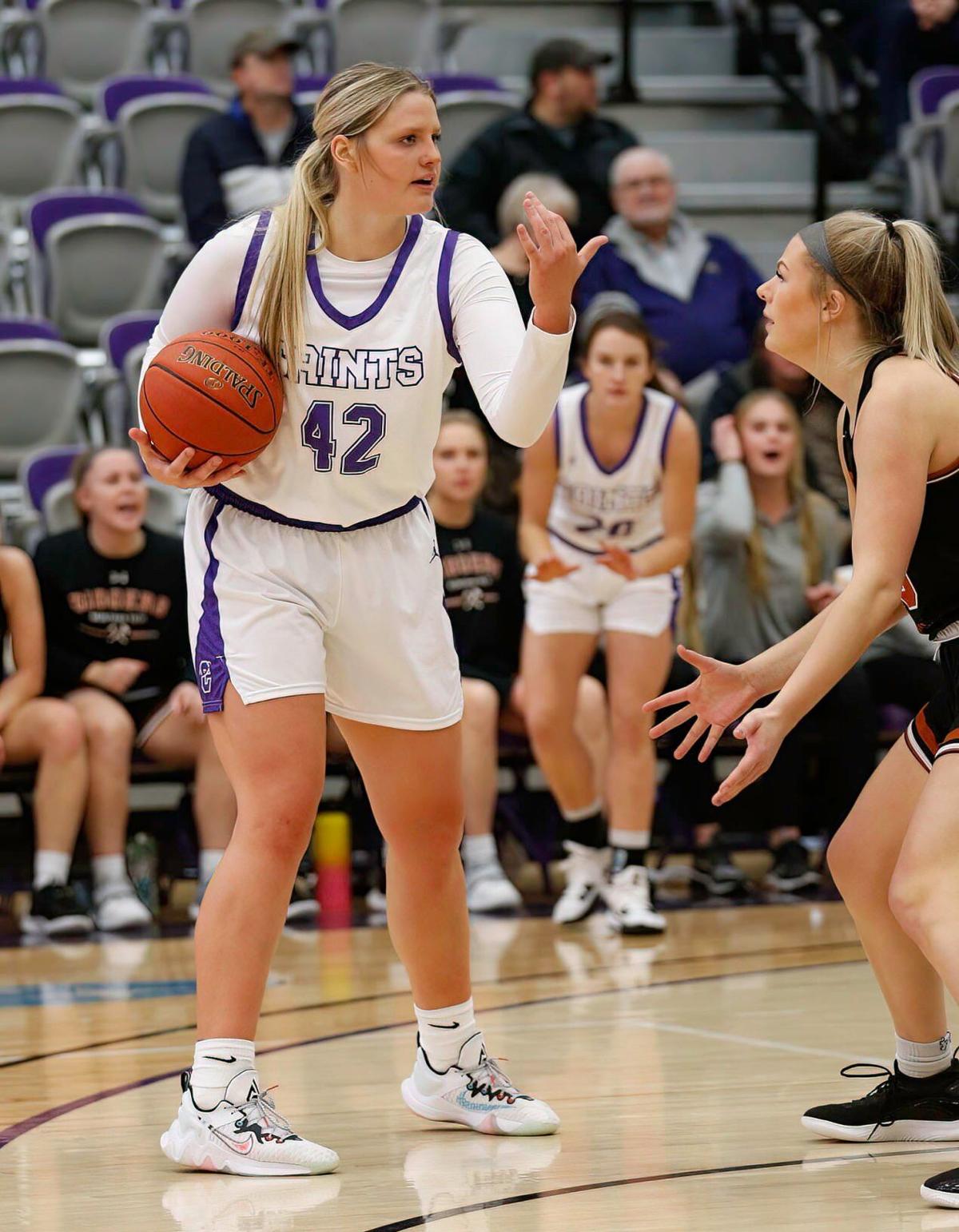 Carroll's Jamie Pickens motions for a teammate during the Saints' 78-46 win over Montana Tech last week. 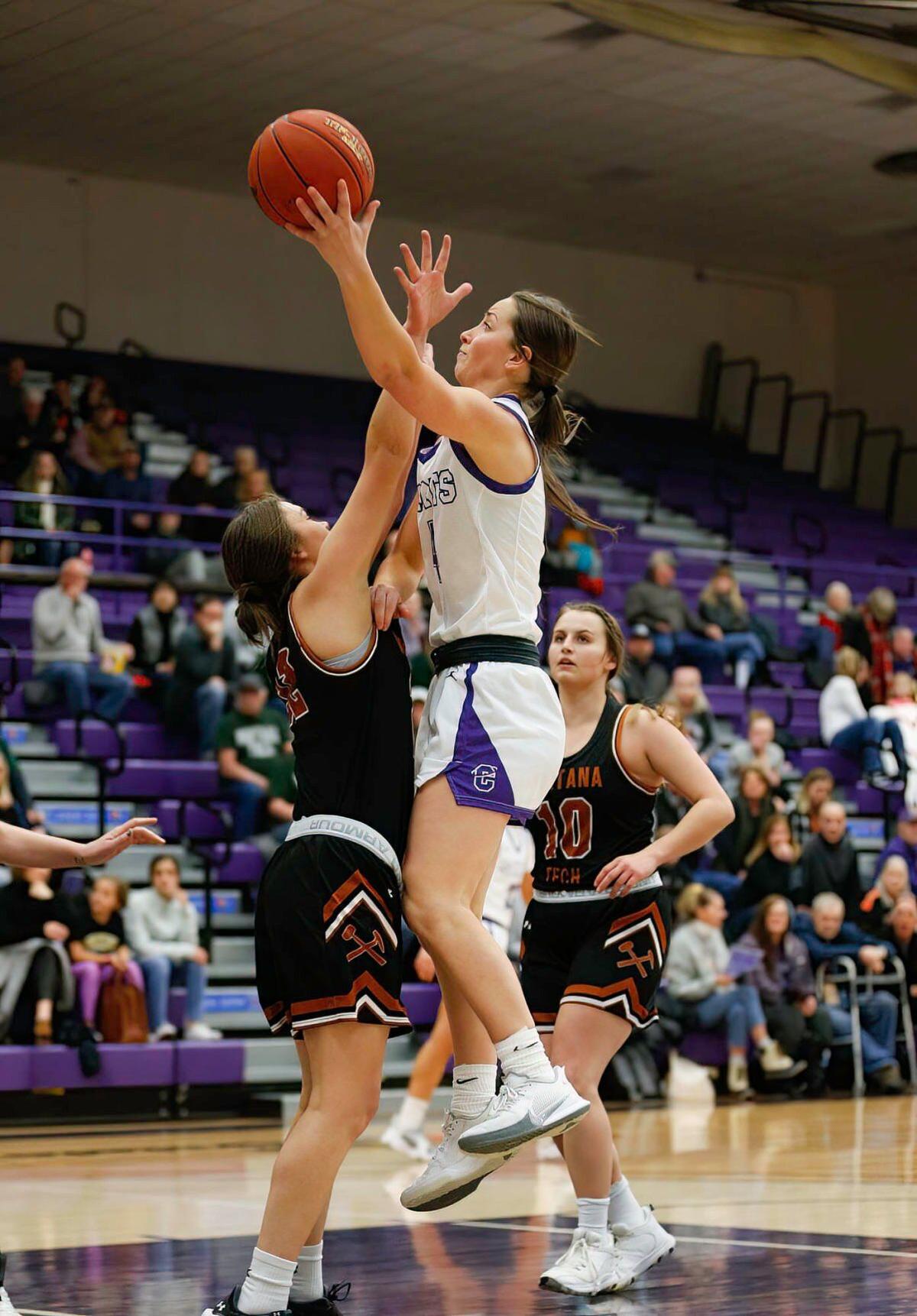 HELENA — To get back in the win column, Carroll must first take down a nationally-ranked Providence team. Not many times this season have the Saints needed to rebound from a defeat, but after falling to a one-loss Rocky Mountain College team on Saturday, that is exactly the task Carroll has on the horizon.

“This season, like any other, is not a sprint, it’s a marathon,” Saints head coach Rachelle Sayers said. “We’re gonna have some ups and downs along the way. We’ve been really fortunate to have a good start to the year and have a lot of positives come out of the preseason. Looking at the [Rocky] game, it wasn’t for a lack of effort, we just didn’t come out as well as we needed to come out and we didn’t finish in the end.”

Thursday night’s game in Great Falls between two top-25 programs will, essentially, be for second place in the Frontier Conference standings. The No. 6 Saints and No. 22 Argos are both 3-1 in league play, and both sport losses to the Battlin’ Bears, with 11 games to go.

“They’re probably one of the more experienced teams, along with us,” Sayers said of Providence. “Getting Parker [Esary] and [Emilee] Maldonado back for an extra year – they have a lot of firepower. Maldonado is one of the best point guards in the league and she facilitates a lot…She’s really just the catalyst for them. The game is going to start and end with the ball in her hands. We’ve got to do our best to limit the opportunities that those two have to create for one another.”

Maldonado and Esary are combining for, on average, better than 31 points per game this season. Three other Argos also average at least 7.6 points. Maldonado will enter Thursday shooting 3-pointers at a 40 percent clip. She also averages five assists and 2.2 steals per game.

Four Argos have started all 19 games. Reed Hazard, Maddy Dixon and Kerstyn Pimperton will likely join Maldonado and Esary in the starting lineup on Thursday. Brooklyn Harn averages the fourth-most minutes played and contributes 11.3 points and 4.4 rebounds per game off the bench.

Carroll is 7-3 in its last 10 games against Providence, but the Argos have taken two of the last three. That includes an 83-80 overtime win last January that represented Carroll’s lone conference loss of the season. Esary scored 28 points in that game and Maldonado hit a pair of late free throws to help ice the Providence victory.

The last trio of games between Carroll and Providence have been decided by 10 points or less.

“The players understand how good [Providence’s] players are,” Sayers said. “I think the matchup is something they look forward to. They know that Providence is a high-powered offense and we’re typically known for our defense and rebounding…There’s nothing better than to come off a loss like Saturday and be able to turn around and get ready for a big game. I know that these guys will be up for it and they’re going to come out fired up and they’re going to come out to go after something.”

Sayers wants to see her team come out aggressive offensively on Thursday. The Argos are going to score a lot of points, like they have all season, and look to push things early. Carroll needs to match or exceed that effort, and according to Sayers, needs to come out with an attack mindset.

Carroll certainly has the firepower to score points in bunches, as well. Heading into Thursday, Carroll is averaging 75.9 points per game on 48.1 percent shooting (fifth-best in the NAIA). Dani Wagner, Jamie Pickens, Christine Denny and Sienna Swannack are all averaging double figures.

Wagner has made 51 3-pointers this season (seventh-most in the NAIA) and is shooting north of 51 percent from the field. Pickens and Denny will enter Thursday’s game each averaging better than 11 points and six rebounds per game, while Swannack, who is coming off a 19-point game against Rocky Mountain, is scoring 10.2 points per game.

Carroll currently ranks ninth in the NAIA, allowing just 53.4 points per game. Opponents average just over 24 rebounds against Carroll (fewest in the NAIA) and the Saints sport the country's sixth-best rebounding margin (plus-12.8).

Wagner, who is 46 points away from passing Emili Woody for second on Carroll’s all-time scoring list, totaled just three points on 1-for-7 shooting in the Saints’ loss against Rocky Mountain last week. It was just her second game back after missing time due to illness. It was also Wagner’s lowest-scoring game of the season and came just two days after she dropped 23 points on Montana Tech in 26 minutes.

“She played well in the Tech game in a short amount of minutes, but then to be able to recover for the next round of games was a lot tougher than we anticipated for her…Dani understands how important it is for our team that she scores,” Sayers said. “She’s going to bounce back from that…

“I trust that she’s going to do that and we’ve talked a little bit about some adjustments that she’s going to make with her aggressiveness and her assertiveness in the offense. I would be super shocked if she doesn’t come out and have a heck of a game on Thursday night.”

Carroll and Providence are scheduled to tip off at 5 p.m. on Thursday in Great Falls. The Saints will turn around and play Montana State Northern, in Havre, on Saturday at 2 p.m. Carroll beat the Skylights 82-40 to open conference play on Dec. 2.

A lot on the line for Montana Lady Griz, Idaho Vandals in Friday's showdown