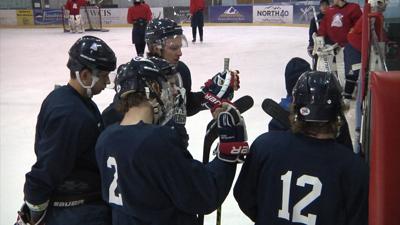 The NA3HL, which is entering their 12th season, serves as one of two USA Hockey Tier III junior leagues that consists of five divisions and a total of 34 teams that will play 47 regular season contests from September 2021 until March 2022.

The schedule for the Americans (27-11-2-0 in the regular season and 30-13-2-0 including the playoffs) is highlighted by two teams that also reached the 2021 NA3HL Playoffs including the top-ranked Sheridan (WY) Hawks, who finished the regular season with just one loss (39-1-0-0 and 42-2-0-0 including the playoffs) and the Gillette (WY) Wild, who are coached by former Great Falls Americans Associate Coach, Ethan Hayes, who guided his squad in his first season in 2020-21 with an overall record of 24-17-1-1. The fourth tournament team was now the defunct Missoula Junior Bruins, who are now the South Dakota-based Badlands Sabres and join the eight-member Frontier Division this season.

The top two teams in the Frontier Division during the 2020-21 (#1 Sheridan Hawks and #2 Great Falls Americans) will meet each four times on the ice (2 home/2 road games) with the first meeting set for Week 4 (October 2-3) of the regular season in Great Falls followed with their second head-to-head meeting on October 15-16th in Sheridan, Wyoming. Before that rivalry, the Gillette Wild and Great Falls Americans will get their first rematch of the 2021 NA3HL Frontier Divisional Semi-Finals in which Great Falls took the best-of-three series, 2-1, in Week 3 with the Wild coming to Great Falls on September 24-25th. The Americans and Wild will tangle on the ice six times with four of those coming on the road. The newest member of the Frontier Division, the Badlands Sabres, based out of Rapid City, South Dakota, will visit the Great Falls Ice Plex on Thanksgiving Weekend (November 26-27) for a twin bill. The Americans will enter South Dakota for the first time on December 3-4. The Sabres will also be in Great Falls in January 2022. In addition to the Friday and Saturday night contests, the leagues also scheduled four Sunday games, two Thursday games and one Wednesday game.

The league released the Frontier Division’s 44-regular season game schedule in addition to the other four divisions (Central, East, West, and South) on Tuesday, July 20, 2021. All regular season games, which begin on Sunday, September 5th and will end on Sunday, March 6, 2022, are subject to change. All teams will also play three regular season games (neutral site) at the league-wide 2021 NA3HL Showcase taking place on December 20-22, 2021, at the Super Rink in Blaine, Minnesota.

Guaranteed games, financial payouts and why, for many, playing non-conference road games is one of few options