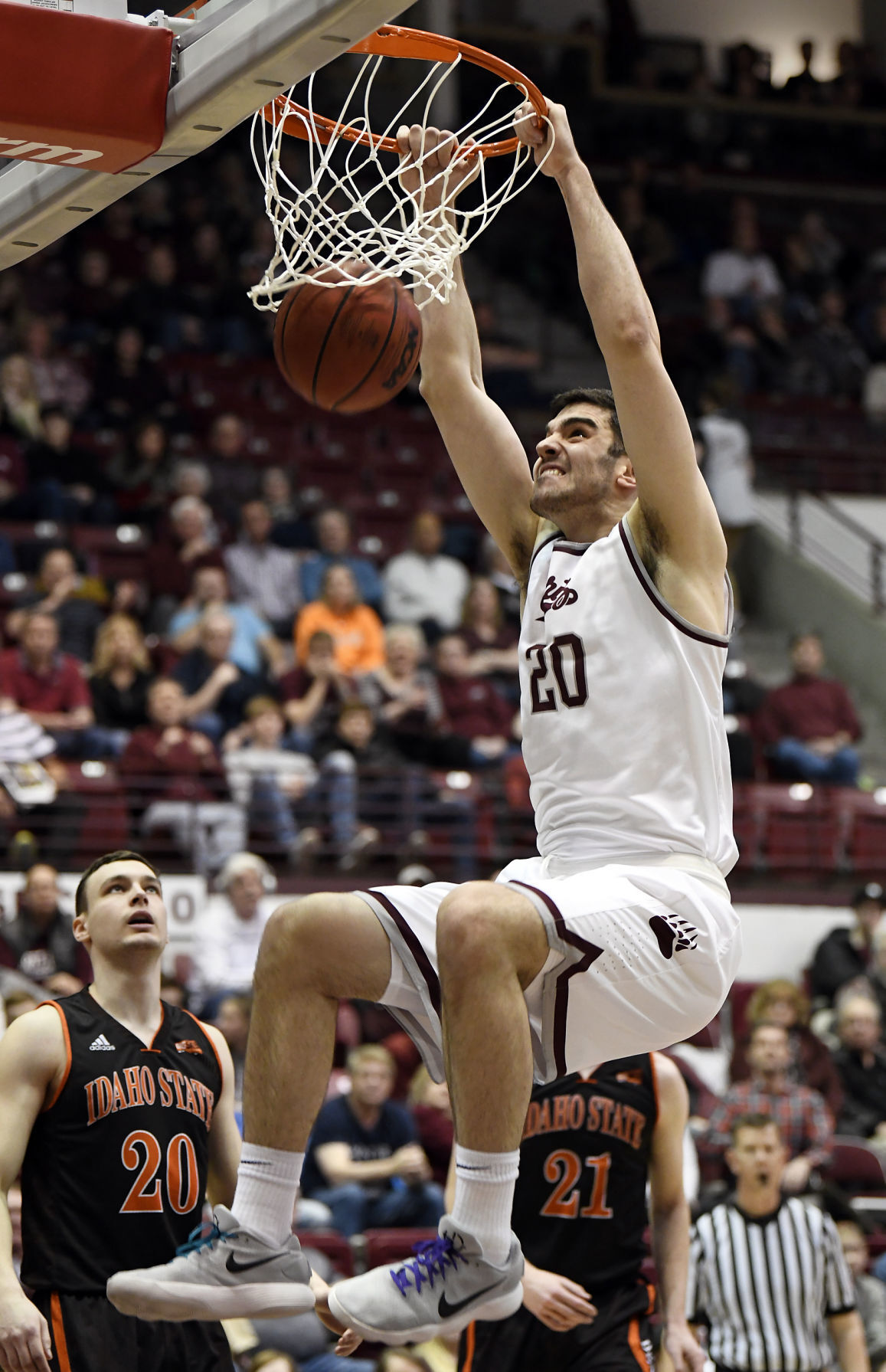 Fabijan Krslovic of Montana dunks the ball against Idaho State on Saturday at Dahlberg Arena. Montana won 75-64 in its last regular-season home game, which was also Krslovic's last home game as a senior. 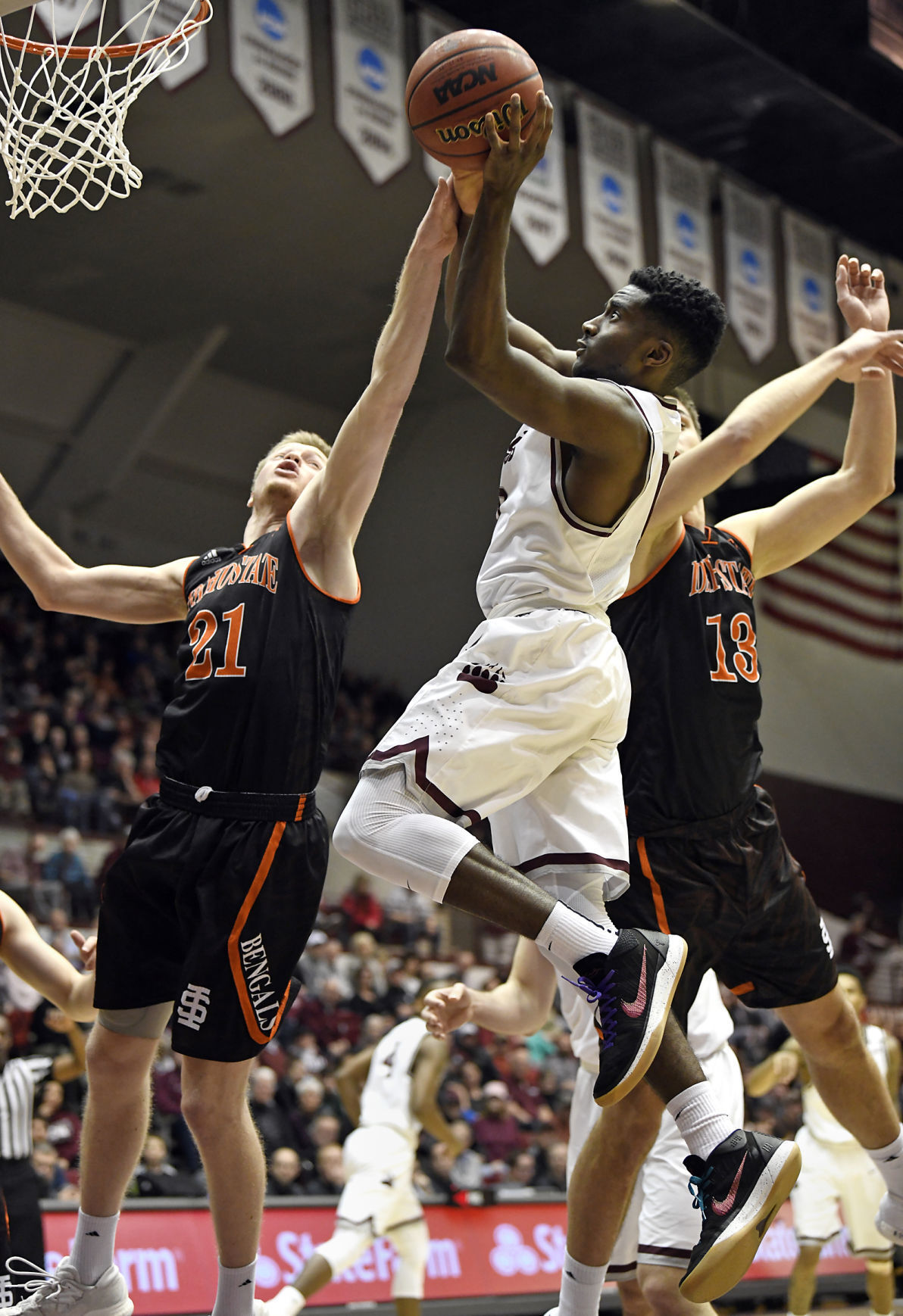 Fabijan Krslovic of Montana dunks the ball against Idaho State on Saturday at Dahlberg Arena. Montana won 75-64 in its last regular-season home game, which was also Krslovic's last home game as a senior.

MISSOULA — Mike Oguine crashed the glass and tipped in a missed shot, drawing a foul.

The Griz junior missed the free throw that would've put Montana up 11 with two minutes left against Idaho State, but the damage had been done. Oguine grabbed a career-high 15 rebounds and scored a game-high 22 points to help Montana dominate the glass and beat the Bengals, 75-64, on senior night to clinch the program's first undefeated home record in 26 years on Saturday.

"When he got the put-back and-1, I'm like, 'Mike, I love playing with you, man. I love watching you play. I love when you're playing like this,'" said Fabijan Krslovic, the Grizzlies' lone senior. "It's special. His athleticism, I don't think anyone in the Big Sky can match it."

Montana became the fifth team in school history to go undefeated at home, posting a 14-0 mark. Head coach Travis DeCuire was a player on the last team (1992) that went undefeated (18-0) at Dahlberg Arena. That team made it to the NCAA tournament.

"It feels like a special accomplishment because there's been some really good teams in between," DeCuire said. "For them not to be able to do that is tough, especially since we probably drew a little tougher home schedule than the norm with the Division I schools that we played."

The Grizzlies reached 23 wins for the eighth time in school history, recording their most victories since the 2013 team won 25 games.

And Krslovic got to go out on top with his parents in attendance after they flew in from Australia.

"It's a lot of happiness," Krslovic said. "It's very bittersweet, I've had a lot of good times, good memories on this court. The fans were absolutely spectacular all year. To be able to go undefeated at home, that's something really special. Not a whole lot of people can say that, let alone accomplishing that on their senior night. It's a very special night."

Oguine made his impact by crashing the glass against the zone when his jumper wasn't falling. Part of his inspiration came from the fact he wanted to send Krslovic, his roommate the past two years, out with a win.

The Griz finished with a 45-27 edge on the boards. It's the third game in a row they've grabbed over 40 rebounds.

"I tried to snatch up as many as I could over these past two games to help us," Oguine said. "I think it adds another dimension to our offense."

The Griz outscored Idaho State 24-1 in second-chance points and grabbed 17 offensive rebounds to Idaho State’s four. The 24 points and 17 rebounds were both Montana’s highest total in conference play.

Idaho State 7-foot center Novak Topalovic had all 10 of his points and six rebounds in the second half after being held without any in the first, picking up two fouls in the opening 3:35 and sitting out the next 16:25.

"That was it," Idaho State head coach Bill Evans said of the difference. "They're a good offensive rebounding team, and they wanted the ball more than we did. It's not rocket science to figure out. You have to go get the ball. You can't stand around and watch. My guys played hard but didn't rebound well enough."

Brandon Boyd scored 19 points to pace the Bengals. Jared Stutzman, the top 3-point shooter in Division I, was limited to 10 points and 2 of 4 from beyond the arc.

The Griz fell down 13-8, their biggest deficit, when Boyd drained the Bengals’ third 3-pointer in the opening 6:33; it was 10:18 before they made another.

They retook their first lead since 2-0 when Timmy Falls drained a 3-pointer in the transition to put Montana up 20-17 with 8:32 left in the half. Idaho State ended a drought of 4:54 without a field goal to take a 21-20, but Pridgett provided a spark of six points of the bench.

In the second half, Akoh grabbed an offensive rebound and scored a layup to give Montana its first double-digit lead, 41-31.

Idaho State started finding lanes to the rim and got transition buckets to cut Montana’s lead to 48-46. The Griz finished with a 44-40 advantage in points in the paint, but Idaho State outscored Montana 28-14 in the second half to stay in the game.

Falls ended a scoring drought of 2:42 with a jumper, starting a 9-2 run that gave Montana its largest lead, 59-48. Oguine capped the run when he secured a loose ball, raced past multiple defenders down the court and finished with a reverse layup.

Idaho State got with 61-56, and Bobby Moorehead put the Griz up 66-56 with a 3-pointer he banked in from the right wing with 2:52 to play. Idaho State didn’t get closer than eight points.

Frank Gogola covers Montana Grizzlies men's basketball for the Missoulian. Follow him on Twitter @FrankGogola or email him at Frank.Gogola@406mtsports.com.

A breakdown of Montana State's running backs before the 2021 season