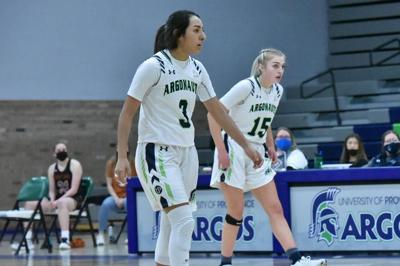 Parker Esary was also recognized in the poll, as she was one of six players to be named to the Frontier Conference Preseason All-Conference team.

"They're such a dynamic duo, the two of them," head coach Bill Himmelberg said. "When you have two All-Americans like that, they're a 1-2 punch any given night."

The returning Frontier Conference Player of the Year, Maldonado returns for her final season after becoming the first player in Argo history to be named a 1st Team All-American last season. The senior guard from Sunnyside, Wash. averaged 16.6 points, 5.1 rebounds and 4.6 assists and also broke the single season school record for three-point percentage (50.0%) and free-throw percentage (91.3%) for the Argos last season.

Esary also returns to the team after becoming the first player in program history to be named an All-American all four years. The senior from Kalama, Washington, who was named 1st Team All-Conference last season,  averaged 15.7 points and 8.6 rebounds last season.

"She's huge for us," Himmelberg said. "She's a leader on and off the court. She's a big part of what we do. A lot of what we do goes through her. It's fun having two up there."

As a team, the Argos were picked to finish third in the conference. The Argos received a total of 18.5 points, a single point behind Montana Western. Carroll College was picked to win the league, receiving a total of 25 points.

"It was really close between us and Western," Himmelberg said. "We're one of the top three teams so that's all that matters. The poll really doesn't matter that much, it's what you do in the games."

The Argos will kick off their season next weekend, with a home game against Southeastern on Oct. 21 at 5:00 p.m. in the McLaughlin Center.

"Last night I was wearing my helmet in the shower." Billings West back to work with title aspirations

Griz kick off second half at Sacramento State