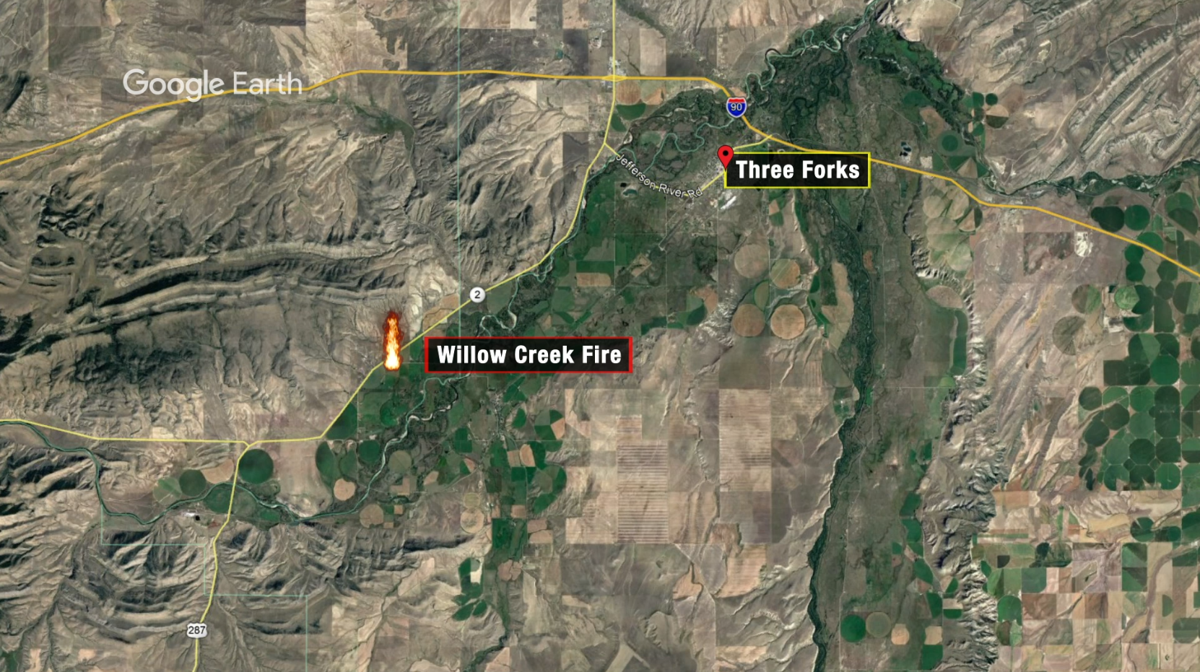 InciWeb reports that 100 percent of the Willow Creek Fire’s perimeter has been contained as of 3:52 pm Saturday.

As of 8:10 p.m. Friday, the Jefferson County Sheriff's Office (JCSO) reports the fire is approximately 95% contained.

More accurate mapping has also placed the size of the fire at around 330 acres.

In a Facebook post, JCSO also strongly encourages the public to prepare your homes and yourselves NOW for a wildfire in your neighborhood. Take action TODAY to protect your home and your loved ones, they wrote.

The Willow Creek fire was reported to be 500 acres large and 10% contained Friday evening.

According to InciWeb, on Friday, firefighters worked to secure the fire’s perimeter and begin mop-up operations with the goal of completing 2-chains, 132 feet in from the fire’s edge, by the end of their shift.

As of 4:16 p.m., InciWeb is reporting about 54 structures are in the fire area, and residents along Milligan Canyon Road were given pre-evacuation notices Wednesday.

According to crews with the Montana Department of Natural Resources (DRNC) and County Assist Team (CAT), the fire did not increase in size yesterday despite changing winds with gusts up to 60 miles-per-hour.

Friday, crews will work to suppress the fire to decrease impact on private property while providing firefighter and public safety, according to the DRNC and CAT. Further, crews will continue engaging with impacted property owners and community members and ensure close coordination with agency administrators and joining agencies with continuing dialog.

Crews will work to establish the fire's perimeter and start mop-up efforts aiming to reach two chains, 132-feet in from the fire's border, by the end of the day.

The Jefferson County Sheriff's Office has ruled the fire as human-caused.

The fire remains 10 percent contained and the fire covers 350 acres, crews said they are confident the containment will increase by the end of the day.

According to InciWeb, 10% of the perimeter of the fire has been contained.

The total number of personnel on the fire, including County Assist Team members, totals 136.

Pre-evacuation notices have been given to residents along Milligan Canyon Road due to the Willow Creek Fire, however, at this time no evacuations are in place.

The fire is not growing in size according to InciWeb and a helicopter that flew the fire’s premier Thursday morning reportedly mapped the fire at about 500 acres in size.

Firefighters are on heightened alert and all measures to ensure firefighter safety are being taken as weather is demonstrating erratic high winds and potential for thunderstorms InciWeb reports.

The fire was reportedly reported to Dillon Dispatch on Wednesday at 3:37 p.m. and local, state and federal firefighters quickly responded, including fire departments from Gallatin, Broadwater and Jefferson County.

The Willow Creek Fire is burning in grass, brush and timber, and areas of the fire are very steep and inaccessible by fire engines.

Four helicopters dropped water on the fire's forward progress to reduce its spread during the first day. Fire resources worked through the evening.

The Fire Public Information Officer tells us that the fire is now at 500 acres.

According to an update from InciWeb, the Willow Creek Fire is burning in grass, brush and timber.

Areas of the fire are very steep and inaccessible by ground, so four Dept. of Natural Resources and Conservation (DNRC) helicopters are working the fire. Additional air and ground resources have been ordered and are on their way.

Currently fire activity has slowed down, and the fire is not currently growing rapidly in size. Fire resources will continue to work through the evening.

Firefighters will remain on heightened alert and all measures to ensure firefighter safety will be taken as weather forecasts indicate erratic winds and thunderstorms in the future.

The fire is approximately 240 acres. No cause of the fire has been released.

The fire was first reported to Dillon Dispatch at 3:37 p.m. Local, state and federal firefighters responded quickly including fire departments from Gallatin, Broadwater and Jefferson County.

No evacuations are in place. Law enforcement is contacting residents in the fire area to put them on notice.

It is reported that less than ten structures are currently threatened, and the fire is moving away from a sub-division area containing numerous structures.

The Montana Department of Natural Resource and Conservation estimates the Willow Creek Fire is burning 240 acres as of 9:19 a.m. Thursday.

Fire officials confirmed that the Willow Creek Fire is still burning 700 acres. They will be having a briefing later this afternoon with updated information.

Right now, they say smoke isn't visible, but as winds pick up, people in the Gallatin County area should start seeing it.

According to the Jefferson County Sheriff's Office (JCSO), crews are working on the fire through the whole night. Right now, there are no evacuations for the area.

JCSO said the fire is expected to continue into Thursday with wind in the forecast.

HELENA, Mont. - The Montana Department of Transportation is reporting a fire approximately four and a half miles south of Three Forks Junction on US-287.

MDT reports the fire is burning in the westward direction and causing low visibility in the area.

No further details have been released.